This weekend was absolutely lovely.

I had the pleasure of heading up to Granbury, Texas, for the Langdon Poetry Weekend, a gathering of Texas poets. A fairly small festival, it's well-attended by publishers, laureates, and talent.

Now, I've gone to my share of poetry festivals and conferences over the years, but to be completely honest, I think this was my best experience yet. This really was all about building a community of poets, of sharing ideas, of inspiration. The readings were all held in historic buildings near downtown Granbury, a small but beautiful town in north-central Texas. Everyone there seemed as though they were old friends, and though it was my first experience here, I felt like I was a part of the group. It was absolutely wonderful. I hope to return next year.

So here's my story!

It was early August. I had never heard of Langdon Review of the Langdon Poetry Weekend, and I kind of pride myself in being in "the know" in the Texas poetry community. But I had no idea about this event. Publisher suggested I look into going, since my book was just released, and it would be a great way to introduce it to other poets.

I looked up their website. Ugh. Granbury is so far away, I thought to myself (about a seven and a half hour drive!). Not only that, but it looked as though the program was already set. I decided to at least ask, just in case. I emailed the organizers, and to my surprise, they were able to fit me in for a short reading. Now I had to go!

The drive up WAS excruciating, especially for B, who spent most of the time at the wheel. He had a night class on Thursday, so it wasn't until after his class that we finally were able to leave Edinburg. My reading was at 9am Friday morning. Yeah, we drove all night. Well, B drove, and I slept. 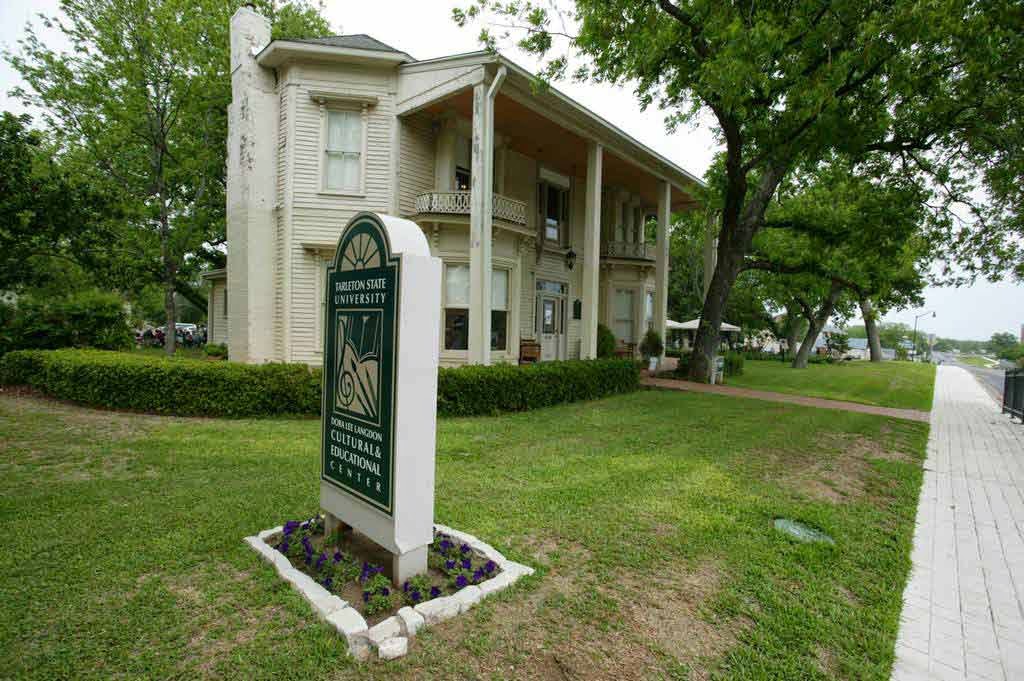 We arrived in Granbury at about 5am. I was a bundle of nerves.  B dropped me off at the cultural arts center, which wow, was a really beautiful little place. It's a series of maybe five or six smallish buildings, but they're all incredibly old and well maintained. The "main house" was just that, an old house, where I was supposed to check-in and such.

I didn't know who to look for or what to do, really, but once I opened the door, I was greeted immediately by a familiar voice. "Katie!" I look around and  there was David Bowles, a good friend from our local valley poetry community. I was starting to feel better already! He was chatting up Larry D. Thomas, former poet laureate of Texas, and Michelle Hartman, both of whom I knew through their works, but had never met personally, though everyone there was incredibly friendly, so it wasn't long before I felt like I was among old friends.

David helps me check in, set up a place to sell my books (which was graciously taken care of for me!), and then, I headed over to my reading, which was to take place in this beautiful old concert hall. On the way over, I meet Karla Morton, former Texas poet laureate and the owner of the legs on my book's cover :-) She's absolutely delightful! I also finally got to put face to name, and met my wonderful publisher Jerry Craven. 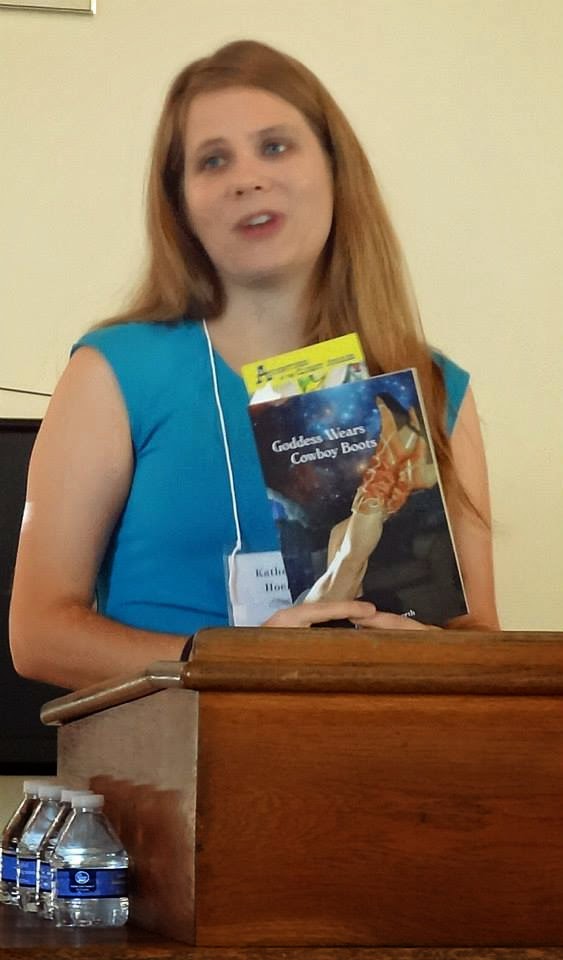 I was nervous (of course). The reading was kind of like a panel, I guess -- a group of four poets reading about 15 minutes or so each. I was first (gulp!), but once I got started, I felt much better. I read five different poems from my book, most of them about goddesses, of course! Also on my panel was yet another former poet laureate James Hoggard, the delightfully funny Alan Gann, and Sherry Craven, who happens to be the wife of my publisher.

Following the reading, there's of course, another reading, only this one took place in another old, beautiful house just a few steps away from the concert hall. I headed over, dying to hear Michelle Hartman read, who was a serious hoot, along with William Davis, Daniel Williams, and Anne McCrady.

Next, was lunch on the lake with Oklahoma poet laureate, Nathan Brown. Aside from a lot of sun, it was a perfect time. I sat at a table with David, Larry Thomas, Carol Resposa, and Anne McCrady. We talked everything from teaching to politics and of course, poetry! Nathan Brown gave a performance under this enormous and beautiful oak tree, which was named the "Poet Tree" where almost all of Texas' poet laureates have read in the past. Oh, and did I mention the food was delicious? It was. And they even had a vegetarian option for little old me. 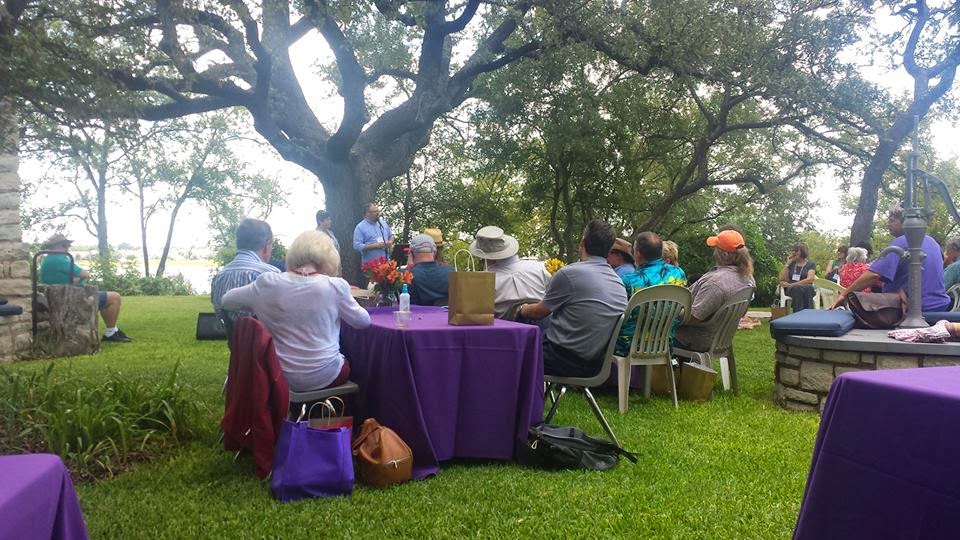 After lunch, I attended a discussion and reading about the new book from SFU Press, Texas 5X5. It sounds like an incredible collection, and the idea of linked short stories written by different authors was really intriguing. 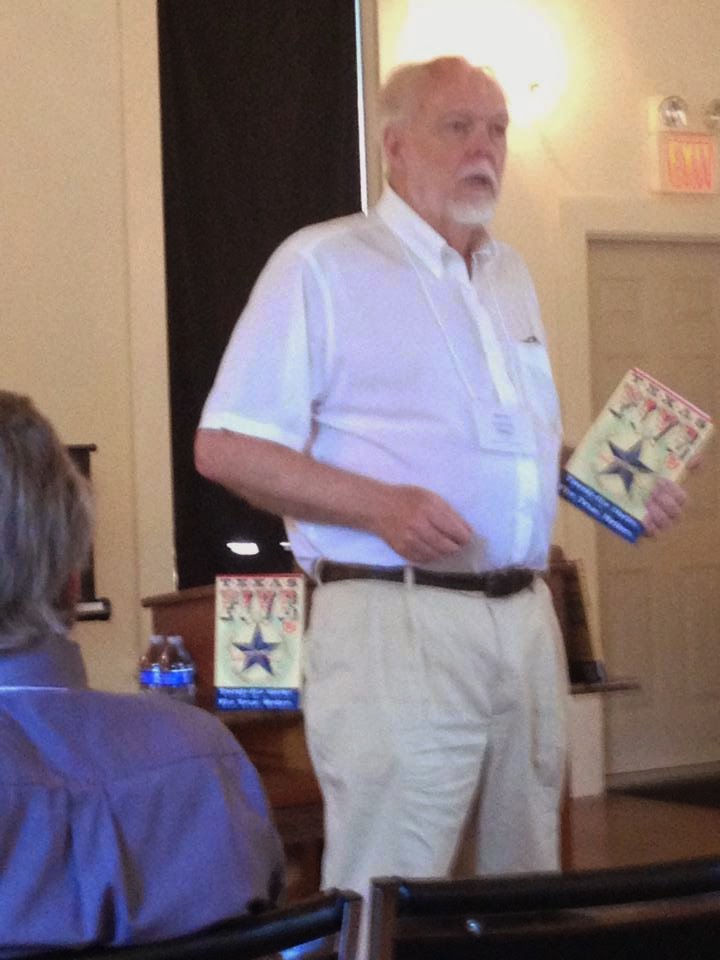 Five contemporary Texas fiction writers responded to five different writing prompts, creating stories that were linked to one another in interesting and sometimes abstract ways. Jerry Craven, pictured left, read his story "Brenda Without Skin" about a young artist who likes to draw his neighbor, a young girl, who, well, doesn't always draw her blinds when she changes. As a feminist, I was cringing at first (no, not another objectification story!), but the story goes in this unexpected direction. You have to read it :) Other panelists included contributors Andew Geyer and Terry Dalrymple. I am looking forward to reading this collection.

The final panel of the afternoon was probably my favorite, though. It was one last hooray of a poetry reading by two former Texas Poet Laureates Alan Brickelbach and Karla K. Morton. They were both absolutely amazing. Karla read with so much energy and enthusiasm, even my sleep deprived self was there with her in a bull fighting ring, at the state fair, in the hospital. I think I have a bit of a poetry crush on her right now. Ok ok ok, a big poetry crush on her. I left inspired to create. 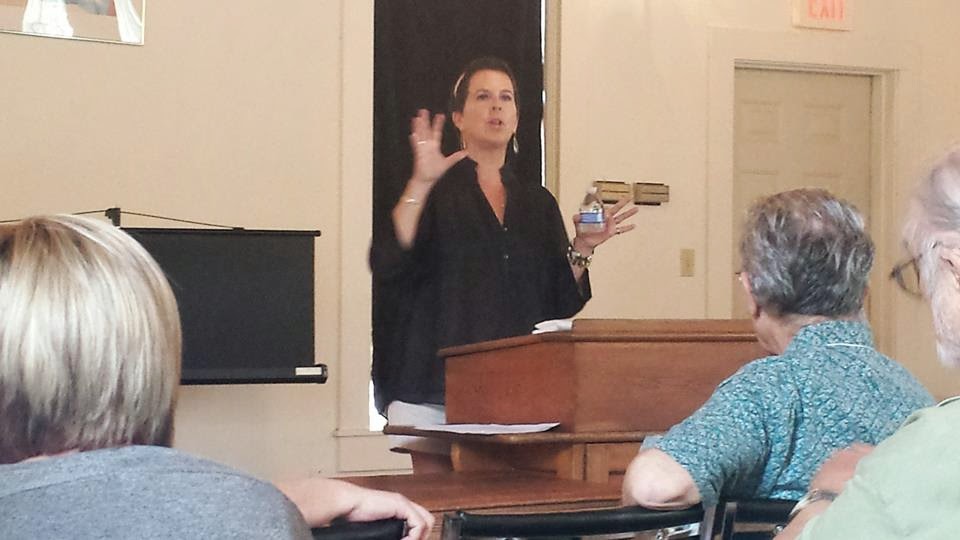 The festivities continued, but alas, at this point, I was beyond pooped. I said my goodbyes to everyone I'd met, had a few more erudite and artsy conversations on my way out. I left with an armful of new books, a head full of ideas for writing, and a heart filled with new friends. I couldn't have had a better day at the festival.

That evening, B and I went to a local German restaurant (his favorite type of food, of course), threw back a beer or two, and then crashed. I don't think I'd ever slept so well :-) 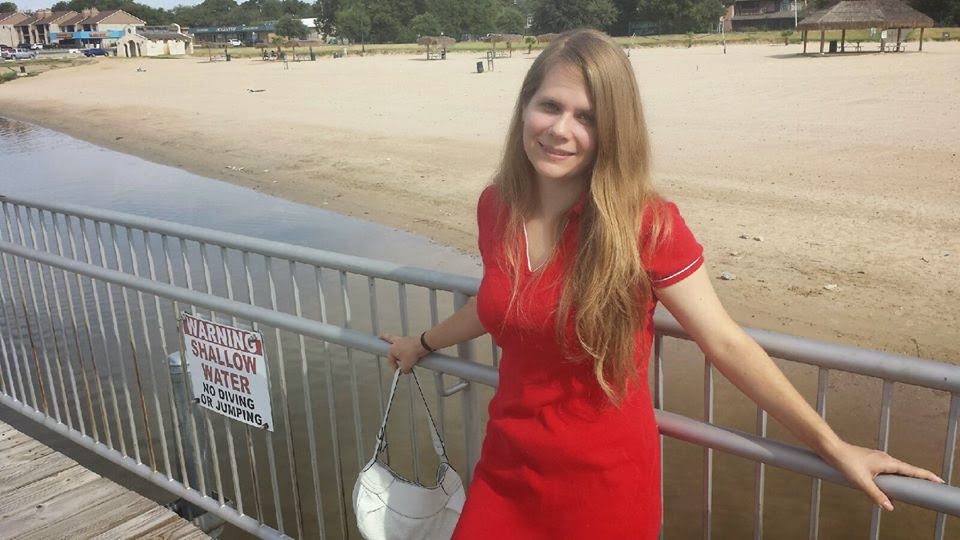 The next day, B and I did a little sight-seeing around town together,checking out some of the local sights together like the "beach," the adorable town square, and the old jailhouse. We stopped by this little coffee house called Paradise, and oh my oh my oh my, I had the most fantastic latte ever. It was a pretty much perfect morning.

We left Granbury at around noon, and headed for home, making a little pit stop in Fredericksburg. On the way home, I dug into my bounty of books.

I hope to go to Langdon again next year, and I hope to submit to their lovely journal, too. Texas has an amazing community of poets, and I'm beyond blessed to be a part of them. Bravo to Tartlton State for putting on this event. I hope that next year, more valley poets will make the trek up to Granbury for a weekend of fun, inspiration, and friendship.
community panel poetics poetry Texas