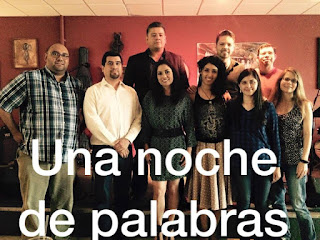 So, I had a pretty eventful weekend! Rossy Lima Padilla invited me to read at the first Noche De Palabras event at Hueso del Fraile in downtown Brownsville. Brownsville's about an hour and a half drive, so I'm typically pretty reluctant to make the trip out there for a short reading, but what the heck, I thought, I'm on vacation!

The event was truly bilingual -- so often, there's just one or two poets who read a piece in Spanish and the rest is in English, including the M.C's intros and words between readers. But this reading was a little different, and it was really refreshing. My Spanish is actually pretty ok believe it or not -- I'm able to understand it, but I don't grasp it well enough to write in it. So of course, my poems were in English, but the other poets were about half and half. I really appreciated the change to hear some quality poetry in Spanish.

The evening's featured reader was Chris Carmona, who is a good friend of mine. He also edited my first book, The Garden Uprooted! So, it was nice to hear his new work and see what he's been up to these past few months. His style is Beat, which is kind of the opposite of what I do. Come to think of it, so many of the valley poets write in that Beat style. I'm the odd formalist out. It's all good. We as poets have more in common than we do differences, and it's always good to experience and get to know work that's different from your own. It makes me consider different points of view as a poet, which adds depth and complexity to my own work. There is always something new to learn.

Anyway, I read new work. Fortunately for me, I've been writing a lot of new material these past couple of weeks, so I figured this venue, a little on the quiet and low key side, would be a great space to try out a new piece or two. In front of a big crowd, I would be too nervous to read new poems that I hadn't practiced. In fact, that Friday, I read drafts of work! Totally unlike me!

The coolest news of the evening was that Rossy, the organizer, invited me back next month to be the featured poet. What an honor! So be on the lookout for an official announcement about that, but it will be in early July (the 10th, I think?). 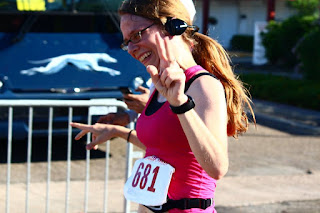 In other Katie news -- I ran a 10k! And you know what else? I came in 1st place in my age/gender division! Wowowowow. I am so unbelievably impressed with myself. And it wasn't some rinky dink race either; there were over 1000 participants, 44 in my age/gender division. So, that's pretty awesome. The race itself was special for a couple of reasons -- first, it was a run across the South Padre Island/Port Isabel Causeway, so the views were spectacular. Second, it's something I've always wanted to do ever since I first heard about this run, but I'd always been lazy or scared. And third, I ran the race with none other than my own Pops! He, too, kicked some serious ass. Above, that's me, crossing the finish line. B took this wonderful shot which I think pretty much sums up my current mood and state of mind. It's no exaggeration to say that I was smiling the entire run, despite the incline on the causeway, the hot, South Texas sun, and the lack of water stations. None of that mattered when I was looking out at the bay, high on endorphins.

For a while there when I first got sick, I didn't think I would be able to run again. Now, I'm more determined than ever to live life to the fullest for as long as I can. We were made to thrive!