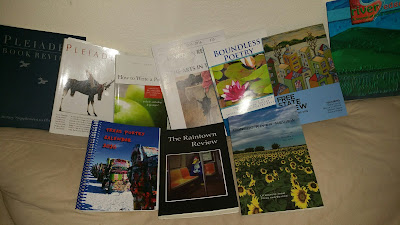 Oh my goodness. Another year has passed. I can't believe it, or how long it's been since I've updated this blog. Ridiculous.

Last year, I posted a picture of my writerly accomplishments, so I thought this year I could continue with that "tradition." This year, I had some success in publications, I won the Helen C. Smith award, I made some great headway on my next poetry manuscript, I taught an amazing creative writing class, but I think most importantly, I learned that regardless of what's going on in my life, I have the capacity to thrive. Looking back, 2014 taught me I was mortal. 2015, you taught me I was IMmortal :) And I'll get to that in a bit.

But starting from the left, top. 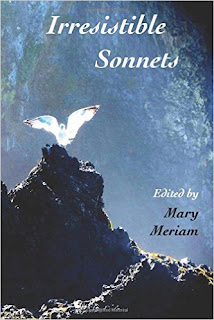 We have the Pleiades book review from winter 2015. In that issue, I published a review of Octavio Quintanilla's If I Go Missing (Slough Press, 2014). In the next little book there, Pleiades summer 2015, I have a review of Mary Meriam's Irresistible Sonnets. Yes. This year I continued reviewing books, but at a slightly less feverish pace than in the past. Reviewing is still important to me, but it's just so darn time consuming. I love reading others' poetry, but constructing an academic argument about it takes a lot of effort. I still plan to review, maybe 2 or so books a year, and maybe more if I find another great venue (that pays. because, time.).

Moving on! Next to the Pleiades is a nifty little book, How to Write a Poem (TS Press, 2015) that includes one of my poems as an example! It's such a cool book about the writing process, and it's one I referred to when teaching poetry (especially the revision of poetry) in my creative writing class this fall.

Let's talk about The Langdon Review. I LOVE this publication, and this year, they featured twelve, yes twelve, of my poems, in addition to a funky little feminist essay about why I write in the first place. Yes. My Slue Foot Sue poems found their home there. The coolest thing about The Langdon Review, though, to me, is that it's released at the Langdon Review Weekend in Granbury every September. What a fantastic festival! I attended and presented there this year, and the experience even included a blast of a road trip with none other than former Texas Poet Laureate Jan Seale. How lucky am I? Very.

Next, we have Boundless 2015. This year, I didn't help edit the anthology, which meant that I had the opportunity to submit. Even better? Perhaps. They took two of my back poems. Like Langdon, Boundless is also released at a festival, and I had a wonderful time yet again, as I always do, at the Valley International Poetry Festival.


Next, we have Boundless 2015. This year, I didn't help edit the anthology, which meant that I had the opportunity to submit. Even better? Perhaps. They took two of my back poems. Like Langdon, Boundless is also released at a festival, and I had a wonderful time yet again, as I always do, at the Valley International Poetry Festival.

Free State Review was released in early 2015, and I even have a little anecdote about that journal :D They ran one of my more, um, snarky poems, “Eve Finally Makes Adam a Sandwich,” which, as you can probably imagine, is a feminist reimagining of the garden of Eden with, sandwiches, because you know, feminists and sandwiches have a tenuous relationship. And so do feminists and Eve. And Eve is my girl. Anyway, I’m getting off track, the anecdote.

I was sitting at on my AWP panel this past spring, and we come to the point of taking questions. Since I’m moderator, I’m looking all serious and acting all tough (that’s what AWP moderators do, after all). Our panel was about revisionist mythmaking, and one of the spectators asks something to the effect of, “how is your work original if you’re just re-imagining myth? Isn’t that just rehashing what’s already written?”

And my little tummy dropped. Probably my big tough moderator persona disappeared and I wasn’t really sure what to say. The other panelists look equally tongue-tied, so I put on my big girl panties and reached for the mic. Before I could, though, another audience member stood up:

“Can I just add something? I’ve read Katie’s work. She’s amazing. She had this poem about Eve making a sandwich for Adam, and, well, it was probably the most original poem I’ve ever read. So, to answer your question, her work is definitely not a rehash. Just read it.”

I had never seen this man before in my life.

After the panel, he came up and introduced himself as the editor of Free State Review!

Anyway, for this anecdote alone, and because of the general tone of the publication, it holds a very special place in my heart.

Next! riverSedge. This journal is a part of my “regular” job. I work on it with the Creative Writing Department at UTRGV. Again, I helped judge the poetry contest this year, so it goes into this picture. For the next issue, I’m editing the interviews section, so, um, would anyone like to submit? You know you want to.

In the bottom row, we have the Texas Poetry Calendar. I have a poem about Luckenbach in there! I’m always delighted to submit to this publication. The editors over at Dos Gatos are amazing. I’m yet to do a reading with them, but that’s one of my goals for his year, should my work get accepted into the 2017 calendar (I’ve already submitted! Have you?).

Then we have The Raintown Review, which is a neat journal of primarily formalist writing. I have a poem in there, “My Last Game at the Diamond.” I found out about Raintown through my time as a part of the Eratosphere poetry workshop, which, come to think of it, is something else I’d like to do again in 2016.

And last but not least, bottom right, we have Concho River Review. I have a poem in there, too, called “Winter in South Texas.” It’s written in Sapphics, which, upon looking back at last year’s blogpost of goals, is one I’m happy to say I’ve achieved. Concho River Review also has a little anecdote to go with it – I’ve submitted there a gazillion times, and they finally picked up a piece. Why was I being so persistent with them? Well, I’d heard so many good things about the journal, and they publish a lot of my friends, so I figured I just had to keep asending and eventually, they’d pick up SOMETHING. SOMETHING. I was right. Persistence is key.

A few other things that happened to me, as a writer and human being, in 2015 that I feel need noting:

1.    I presented at AWP. I survived the craziness of travelling to Minnesota and my spine didn’t collapse and I didn’t even hobble very much around the conference. It was incredibly good for my self-esteem. I can do things! While this was my second time moderating a panel, this time, it felt more nerve-wracking mostly because my health condition. But I didn’t let that get in the way. I did it. And I had a blast.

2.    I won the Helen C. Smith Award for the best book of poetry in the state from the Texas Institute of Letters. Yes. I did. That really happened. I’m still basking in the afterglow.

3.    I had an amazing writing summer. Amazing. My next manuscript found its shape. Now it’s just a matter of filling it in, giving it the depth and complexity it needs to be awesome. And also, it needs to be fatter because Publisher likes his manuscripts with a little extra around the spine. Har. Har. Har.

4.    I taught an AMAZING creative writing class. AMAZING. AMAZING. I am so proud of my students. TWO of them got published in our local newspaper. We organized a reading in the community. We knocked everyone’s socks off. Maybe some undies, too. With this class, I feel like I’m coming full circle, at least a little bit. I’ve gotten a taste of mentoring others, of basking in their success. And you know what? It feels awesome. I love teaching. It’s almost better than writing.

5.    The most significant accomplishment of 2015? You know what, it can be summed up in one single word: THRIVE. Despite the shitstorm that has become facets of my life, despite my health issues and despite personal bullshit, I’ve proved it to myself that I can do this. At the beginning of 2015, I remember I was sitting in my office, surfing facebook as I oft do, with a shitty pain in my back as I scrolled through my feed, watching my friends run the Causeway 10k in South Padre Island. I said to myself, I want to do that.

And I did. Come June.

I remember when I was in the hospital, when the surgeon told me I was going to need some bolts put into my spine, my first emotion was fear. And then, it was regret. I had lost my chance to run a marathon, to kick that off my bucket list. It was a life goal I wasn’t going to be able to achieve. I’d put it off for too long and now it was impossible. I’d always thought of myself as invincible, immortal, able to do anything if I worked hard enough, because always in my life, that’s been true. But here was something I just couldn’t do. More than anything, THAT was what bothered me most lying in that hospital bed (maybe because I was on a lot of morphine so pain wasn’t a big thing and I wasn’t thinking straight).

But you know what? Anything IS possible. If you work hard, if you have a fighter’s spirit, if you light a fire under your own ass, you can do anything, even the impossible. 2015 for me was proof of that. No cane. No pain medication. No surgery. Just a big dose of mental toughness and the miracle that is the human body’s will to thrive. Thrive. Not merely survive.

And you know what? Writing works the same way. We make progress one day at a time, and little by little, those determined (sometimes downright shitty) hours of hard work and pain and frustration add up to miracles, to great feats that were once impossible. It takes a lot of gumption. It takes a certain kind of crazy. But you know what? That’s exactly what I am J

1.    Finish next poetry manuscript. I would like to have this done by August and sent to Publisher.
2.    After August, find a new writerly direction before the year’s end. Maybe that’ll be the verse novel I’ve been kicking around in my head. Or maybe it’ll be something else, but figure this out.
3.    Submit my poetry. I’ve gotten slacky slacky with this over the past few years. This year, I want to submit to 50 different publications. I’ve already submitted to one. So, 49 more!
4.    Be more active in the poetry community. Do readings outside of my local area in other parts of Texas. I’ve got a bit of a headstart on this one. I’m presenting at the Kelton conference in San Angelo this spring. I’d like to do Poetry at Round Top if I can afford it (depends on whether or not I can pick up an extra class to teach). Let’s shoot for at least 5 out of area readings this year.
5.    Pursue career advancement. What’s the next step? Where do I go from here? There are a few paths ahead, and I know I’ll be taking one!
6.    Run. Because it makes me feel immortal and I am a goddess after all, in Brooks Glycerin 13’s.