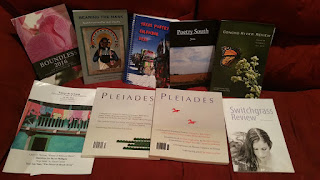 Well there she is, my 2016 in publications.
Let me begin by saying that I KNOW 2016 sucked for so many individuals. Right now, I think the everyone is kind of collectively giving the year the finger, for various reasons, including a slough of celebrity deaths, a crazy election, and of course war.
I get that. I really do. But personally, 2016 has been a wonderful year and I am so grateful to have lived through it. I'm the same person I was in 2015, though perhaps a little wiser. Maybe turning thirty does that to a person. I actually see the value in the cumulative lessons life has taught me so far, and I feel excited, enthusiastic, and dare I say optimistic, looking forward to the new year.
Ok, enough of that. Let's talk about poetry. Above, you'll see a few publications. I started the tradition a few years back of taking a photo of my writerly accomplishments and posting them here and on facebook as a kind of chronicle of my journey. It helps me reflect on what the year has been. So often, I'm looking forward and don't take the opportunity to look back.

Let's start with the top left.

First off, we have Boundless 2016. I had a few poems published in the anthology of the Rio Grande Valley International Poetry Festival this year, as I have every year since 2008. It's a wonderful anthology to be a part of, but perhaps even more significantly, it's a wonderful COMMUNITY to be a part of. This year, I didn't participate much in the festival itself. I was incredibly busy in April with a half marathon followed by a Texas Institute of Letters meeting and that weekend, I really wanted nothing more than to decompress. I made it out to the anthology release party, though, and had a wonderful time. I was even recruited to help MC, which I was honored to do. Kudos  to Daniel Garcia Ordaz as per always for making this happen. Oh, fun fact about this picture: my former student is in there! What the what?! She was published in the anthology, too. We're standing next to each other. I was so proud!

Moving to the right, we have Bearing the Mask (Dos Gatos Press), an anthology of southwestern persona poems. I was honored to have three poems included in this neat book -- a poem about Kitty Leeroy, one about Calamity Jane, and a poem about Slue Foot Sue! Another fun fact -- I wrote these poems for the anthology specifically, but in writing the Slue Foot Sue poem, I found my inspiration for my forthcoming book, The Lost Chronicles of Slue Foot Sue, due out early next year. Woot woot!

Next, we have the 2016 Texas Poetry Calendar. This another publication I've been honored to be a part of for a few years now. I think my first inclusion was 2012, and I've been in each year since. I love writing about my adopted home state, so it's a fitting place to submit my work. I have a poem coming out in the 2017 version, too, one of my Eve poems. Next year is the last year Dos Gatos will be publishing the calendar, but I've heard another press is picking it up so that's good news!

Then, we have Poetry South. This publication actually came in the mail just a few days go. I'm still making my way through it. I have a poem in there, "My Suegra's Molcajete." I wrote it about my suegra's battle with cancer, so it's a piece that's very near and dear to my heart. Thankfully, 2016 was the year she beat cancer and is now cancer-free. For me, that's the main reason 2016 was a good year.

On the top far right, we have Concho River Review published out of Angelo State Univeristy. They ran another one of my Eve poems, a sonnet actually! It's about contemporary women and our complicated relationship with food. In the end, though, good old Eve gives some sound advice. The publication, CRR, is one of my favorites and I'm so honored to be a part of it this year. It's edited by none other than Jerry Bradley, who is a poet I admire very much for his wit, wry humor, and craft. Oh! And I visited Angelo State University for their annual writer's conference last year. So, there's a picture of me reading.

Now to the bottom. On the left, first we have Voices de la Luna. They also ran a Slue Foot Sue poem! I was really happy to be in this journal because it's edited by another poet I admire, Carol Coffee Reposa. She is just an amazing person. I met Carol a few years ago at the first Langdon Review weekend, add I've seen her at poetry events here and there around the state. She is one of my many role models as a strong, smart, and accomplished women. It's women like Carol that have made it easy for young women like me to follow in their footsteps. There's Carol and I, along with Edward Vidaurre and Celina Villa Garcia, at the Gemini Ink conference in San Antonio last summer. We were talking about how we put together or organize a poetry manuscript. I learned so much!

Next come the two issues of Pleiades. I've been writing book reviews for them for the past few years and simply LOVE doing it. In the winter 2016 issue, I reviewed Ron Moore's If In Later Years (TCU Press) which was a marvelous and beautiful meditation on aging, and Her Texas (Wings Press), which was an anthology of poetry, fiction, nonfiction and art written by Texas women. I LOVED reviewing and thinking about Her Texas. It is such a fine, accomplished compilation of works. IF I get into a PhD program here in Texas, I want to continue this sort of important work of chronicling women's voices in the state.

And last but certainly not least, on the bottom far right, we have Switchgrass Review. I published a couple of more personal poems about my health issues. For me, these poem are both difficult to write and difficult to publish, so I was honored for them to find such a fitting home. The journal is run by a woman I trust and respect immensely (otherwise, I wouldn't have submitted these pieces), Robin Carstensen. I met Robin early this year at the People's Poetry Festival in Corpus Christi at the university there, a festival she, too runs. Talk about being a force of nature, huh? Here's a picture of me at the festival, just cuz I'm feeling reminiscent. Also pictured is Arturo Saldana (an amazing Chicano writer who unfortunately passed away this year), and Edward Vidaurre. Edward and I do a lot together, apparently. We're buds like that.

Here are a few other notables that happened to me this year:

1. I finished my third full poetry collection, submitted it to Publisher, and it was ACCEPTED. So, in 2017, I'm expecting a brand new baby poetry manuscript. You already knew that, didn't you? But no list of yearly notables would be complete without AT LEAST mentioning this little gem.

2. I was named the Langdon Review Writer in Residence for 2017. I'll be spending my residency in Scotland this summer. OMG.

3. I was PROLIFIC. Seriously. I don't even know exactly how many poems I wrote this year but damn it was a lot. During the summer, I just found this amazing spring of poetry. Though I slowed down considerably since then, I've been able to write this month so I'm finishing the year off strong. Nice. I should probably count how many poems I wrote, shouldn't I? I don't even know how to go about doing that. My poetry archives are such a ridiculous mess.

4. I had another AMAZING semester teaching creative writing. It really was! I learned so much from my kiddos and I hope they feel the same about me. Wait. They're not kiddos. But whatever. From my adults. That just sounds weird. Bleh. It was a good semester, ok? Let's leave it at that.

5. Publications: I had 19 individual poems accepted for publication in literary journals this year. Not bad!

6. Submissions: I did them. Obv. I opened up my submission tracker to count and got dizzy. You don't need an exact number. Just know that my acceptance/rejection ratio tends to run like 1/10, so, we can do a little math and see that I sent out a boat load of submissions.

7. I was elected the Vice President of the Texas Association of Creative Writing Teachers. Go me!

8. I put on a pair of big girl panties and submitted to five different PhD programs like the badass I am. In the past, this has always been something that's intimidated me. I used to figure that PhD programs weren't for people like me -- they were for the mighty, the gifted, the crazy smart or people that had like no life whatsoever. Maybe I'm one of those things, but really, I'm just an average girl who knows what it means to work hard. Maybe that's enough. If not, I am a fighter, and I'll try again next year.

I need a few more days to think about my goals for 2017, what I want to focus on, what I want to improve about myself as a writer and a human being. For now, I'm looking back at 2016 and it's shown me that I am both capable and blessed. Capable because I set my mind to doing things and then power through. Blessed because the people around me, my family, B, and my mentors, never cease to support me in my wild and crazy dreams.

Today, over lunch, I told B that I feel as though I have a certain luck, a certain edge, a certain something where life seems to always deal me a winning hand. It may not always be the hand I want or in the time I want, but somehow, someway, I thrive. And for that, I think I can simply be nothing but grateful. Thank you, 2016, for being yet another amazing year.