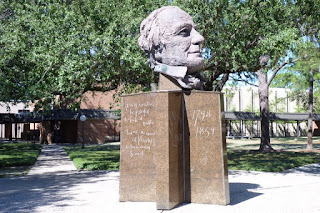 Next month, I'll be heading over to AWP and speaking on a panel about book contests and small press publishing. I'm gathering together my notes for my little talk, and it's actually been a great learning process for me to think through some of the practices that Lamar University Literary Press has. I also realize that there's a lot of mystery and perhaps misconception about what happens at a university or literary press. How do we choose our manuscripts? How are we funded? What all goes into the process of making books? And who's involved?

I thought a little blogpost might help shed some light on what we do, why we do it, and how it all came to be this way. Also, it will help me figure out what I want to say!

First of all, the panel. We'll be talking about why we DON'T use contests to generate revenue and find manuscripts. I feel that, in the literary landscape today, we are far too reliant on the contest model for both the generation of income for small presses and for the discovery of new writers. I think back to myself when I was shopping around my first manuscript. I was in my mid 20's, having just graduated with my MFA. I wanted to submit my manuscript, which was a revised version of my thesis, to some presses in hopes of getting it published. At the time, I was working two jobs--a full time staff member at at university making a paltry but livable salary ($30,000 per year), and as an adjunct at a local community college that paid me, literally, $800 per SEMESTER. I had some student loans to pay, a mortgage, a car payment. B was working as a teacher. We weren't rich but we were doing ok.

And I am/was privileged in that I had a steady income, albeit one that didn't allow for much wiggle room, and health insurance.  I could afford to send my poetry manuscript to contests, but did I want to spend my limited discretionary income on what's essentially a crap shoot? Of course not. And I had the luxury of that choice; so many writers don't.

My point is that the contest model, when it's the only model available to first book authors, is classist. It silences writers who don't have the discretionary income to toss around on that .001% chance that their manuscript will catch a slush-shifter's eye, and then an editor's eye, and then the judge's eye when it's all said and done. So when that's the only model, we're missing out on writers whose voices have been also traditionally marginalized and silenced--writers of color, women (who, of course, earn less than their male counterparts thanks to the wage gap), disabled writers, immigrant writers, working class writers, etc. We're perpetuating that historical imbalance. Not good.

So, in American letters, we need an alternative. We need presses that serve as an outlet for ALL writers that don't pose monetary barriers, that don't charge their writers an admission fee to play the game. At LULP, we're in a unique position because we DON'T need make any money. We're not a business. Our goal is the betterment of American/Texas letters. So, in turn, we don't need to run contests. I see our function as a vital one.

Let's talk money for a moment, though. I know, it's a dirty, taboo subject. If ours doesn't come from submission fees or contests, then where does it come from? We don't really have much money because we don't make much. Our limited resources come primarily from book sales to authors, who can purchase their own books from us from a deeply discounted rate. We also sell through Amazon, which, if you know much about how the bookselling business works, is essentially predatory towards small presses like us, so we make very little. The goal for each book is to simply make enough to cover the costs of the next book we put out--of uploading the title to the printer, purchasing an ISBN, and printing maybe 10 or so copies for sending off to reviewers and contests. Because we're print on demand, our costs are very small. To publish a book costs us between $200 to $300. We have to keep our costs low because we don't make money.  The university, thankfully, pays our one full time employee's salary. I work half time for the press and half-time for the department of English and Modern Languages. We have an editorial assistant who is really the English department's, but my chair kind of lends her position to us because we need the extra help. We have office space, computers, and a website all provided by the university.

Because of our limited income, we don't have much money to play around with for promotion and such. But we have enough to make ends meet, to not charge our writers fees, and to keep our heads above water. It's enough.

You might wonder how we come to choose the books we do, if not through contests. We are open to submissions year round. Authors submit proposals to us through an online submission manager. Our editorial assistant and I sift through them (mostly our editorial assistant). We probably average about one manuscript submission a day. Little of what we publish comes from this slush pile, though, as many authors submit books entirely inappropriate for our press (think, genre fiction, how-to manuals, and children's books--all stuff we would never publish). Much of what we publish comes from solicitation and author recommendations. Because both Director and myself are active in the Texas literary scene, going to conferences, readings, and presentations, we try to see a lot of what's out there and approach authors at these kinds of venues. We ask past authors for recommendations. We reach out actively. Personally, I try to solicit books from writers of color and women, as these groups are underrepresented in our slush pile and our catalog.

Anything we receive, either through slush, solicitation, or recommendation, gets read by a committee of readers. Our readers are colleagues from Lamar, past authors, and professors from other universities. Each manuscript gets several reads. Ultimately, either Director or myself also has to give it the thumbs up. Usually both of us.

I think our process is a good one for a number of reasons:


There are, too, a few drawbacks and things we could work on. If we ran contests and/or charged submission fees, we wouldn't have as many inappropriate books in the slush pile, which would free up some time. We'd have more money to use to promote our authors and perhaps pay them. We would rely less on the kindness and ingenuity of my department chair in finding us money for special projects. We'd have more freedom. I also think we need to do a better job at being inclusive and having a diverse catalog, though I think choosing not to charge our authors is a step in this direction.

I understand why some presses run contests. Poetry book contests, especially FIRST book contests, play an important role in the discovery of new voices and promoting authors early in their careers. Most contests, the ones I've been involved in as a reader, anyway, have been moral, ethical, and fair from my perspective. I just think that the current literary landscape relies too much on them. It's not the only way to publish books, and authors, readers, and publishers need alternatives.

LULP is in a unique position. I believe so much in what we do! Our model and practice is different from both traditional university presses and traditional independent presses. It's a model that works for us, and I'm really looking forward to sharing our process and learning from other small press publishers next month at AWP.