Death at the White Camellia Orphanage 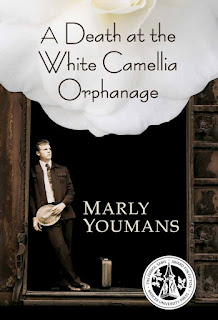 So I know my blog is mostly about poetry, but...

Tomorrow happens to be the release date for A Death at the White Camellia Orphanage, a fantastic novel by the even more fantastic Marly Youmans.

As I was reading the first chapter (which, yes, if you click that nice little link you'll get to read it, too!) I found that there was, indeed, poetry hidden within the prose. To be expected, though. Marly's a talented poet, too! How crafty... the first chapter ends at a rather suspenseful moment. Which means only one thing... I'm buying the book X-D

I've known Marly for about a year now; we met at West Chester last summer. She's an author, poet, blogger, and mom extraordinaire . How does one woman do it all? I'm honestly not sure and I'm still trying to figure that out for myself... but she must have some sort of super power, that's all I'm going to say..

Anyway, her latest book comes out tomorrow, so check it out!

Here's some more information on A Death at the White Camellia Orphanage, since, well, you probably don't just want to take my word for it.

In A Death at the White Camellia Orphanage, Marly Youmans gives us a beautifully written and exceptionally satisfying novel. The book reads as if Youmans took the best parts of The Grapes of Wrath, On the Road, The Reivers, The Adventures of Huckleberry Finn, and The Curious Incident of the Dog in the Night-Time and crafted from them a tale both magical and fine. Her rich language and lovely turns of phrase invite the reader to linger. Ironically, there is at the same time a subtle pressure throughout the novel to turn the page, because Youmans has achieved that rarest of all accomplishments: she has created a flawed hero about which we care. A Death at the White Camellia Orphanage is one of the best books I have read.


After a death at the White Camellia Orphanage, young Pip Tatnall leaves Lexsy, Georgia to become a road kid, riding the rails east, west, and north. A bright, unusual boy who is disillusioned at a young age, Pip believes that he sees guilt shining in the faces of men wherever he goes. On his picaresque journey, he sweeps through society, revealing the highest and lowest in human nature and only slowly coming to self-understanding. He searches the points of the compass for what will help, groping for a place where he can feel content, certain that he has no place where he belongs and that he rides the rails through a great darkness. His difficult path to collect enough radiance to light his way home is the road of a boy struggling to come to terms with the cruel but sometimes lovely world of Depression-era America.

On Youmans’s prior forays into the past, reviewers praised her “spellbinding force” (Bob Sumner, Orlando Sentinel), “prodigious powers of description” (Philip Gambone, New York Times), “serious artistry,” “unobtrusively beautiful language,” and “considerable power” (Fred Chappell, Raleigh News and Observer), “haunting, lyrical language and fierce intelligence” (starred review,Publishers Weekly.) Howard Bahr wrote of The Wolf Pit, “Ms. Youmans is an inspiration to every writer who must compete with himself. I had thought Catherwood unsurpassable, but Ms. Youmans has done it. Her characters are real; they live and move in the stream of Time as if they had passed only yesterday. Her lyricism breaks my heart and fills me with envy and delight. No other writer I know of can bring the past to us so musically, so truly.”

3. Techno-minions will respond when they feel so moved. Occasionally. Possibly from time to time. When they crawl out from under the beds with the dust bunnies.