By Katie - July 27, 2016
Let me just begin this post by saying how incredibly blessed I am to 1. have such amazing writer friends and 2. have the ability to travel and see said friends. How fortunate am I to have found a home here in the Texas literary community? Very.

The past week was a testament to that. I've been on the road reading, learning, and exploring, and it's been so refreshing. Let me give you a quick rundown of my literary excursion with some pictures.

Last Thursday, Bruno and I left our humble little abode for the wide and open road. I had a few things on my "to do" list, and some spare time for, well, let's call it inspired travel. We spent Thursday on the road, heading up to San Antonio from Edinburg. On Friday morning, I was scheduled to speak on a panel at the Gemini Ink writer's conference, so I was a little nervous.

Friday morning comes around and I arrive at the Tropicana Hotel on the San Antonio Riverwalk. The first thing on my agenda is to get settled in and check out the keynote address, given by the publisher of Trinity Press. His talk opens up the conference on an exciting note, framing the recent changes in the publishing industry as not apocalyptic as many might call them, but instead as groundbreaking and exciting. Being an eternal optimist, I'm intrigued.

I was fortunate enough to speak on a panel about Suffering and Sentimentality from an editor's perspective with Robin Carstensen and Odilia Galvan Rodriguez. The panel ended up being a conversation, which I love, love, love. I added that I think a lot of editors/publishers tend to see sentimentality as a negative thing rather than a positive, but also, perhaps it's a way of excluding voices that don't fit the "norm" -- the voices of women, minorities, LGBT individuals, and differently abled peoples. We heard a lot of different ideas and thoughts, and the ending sentiment (hah) was really inspiring -- as writers, we should be open to exploring that line between passion and sentimentality. Carol Coffee Reposa, who was in the audience, approached me afterwards and noted that all the "Great" poems flirt with that line -- come right up close to it. So maybe that's the key to writing great rather than good work -- to risk sentimentality?

Anyway, I ended up learning a lot from our conversations.

Afterwards, I attended a panel on book marketing, which, as a writer, isn't something I think about all that often. I know I should, but it's tough, you know? Bryce Milligan of Wings Press added that, for poets, the most important way to market your work is through giving readings and hand selling, which I'm much more apt at (I think...). 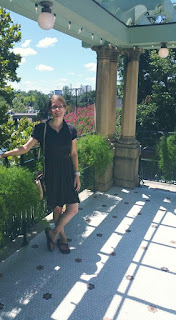 Anywho, after the panel I needed some space to empty my brain, so I called up B and we headed over to the riverwalk for some lunch. We went to one of our favorite places, The Guenther House, and spent a bit of time exploring the old flour mill. Good times. That's me, pictured at the left, on the balcony of said restaurant. I really love their ambiance! It was a perfect place for a little peaceful lunch.

I had another panel scheduled for later that afternoon, so I head back to the conference at around 3. I attend another panel on writing trauma with Wendy Barker (wow!), but ended up ducking out early to prep for my own discussion.

Our afternoon panel was on the process of how to develop and put together a poetry manuscript. Since this is something I've recently struggled with, I felt particularly apt to talk about my own process. It was really enlightening, too, to learn about the processes of my fellow panelists, Carol Coffee Reposa, Edward Vidaurre, and Celina Villagarcia. My main advice was that every book has to have some sort of an argument, a central message to it. And I talked about how I had to narrow that down for my forthcoming book, The Lost Chronicles of Slue Foot Sue. There we are, pictured below. Don't we look smart? That's because we are. 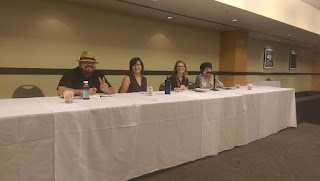 That evening, although there was an amazing reading planned, I decided I needed to skip it and take it easy. B and I went out for some sushi at this really neat place and I had, err, maybe a little more sake than I'm used to. It was delightful :) 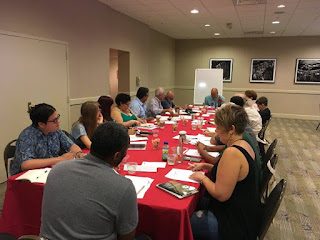 The next morning I was scheduled to attend a workshop with Tim Seibles. How fortunate am I??? I learned so much from the workshop. Even though a lot of it was advice I had already heard, it was really great to hear about the process of another writer. The workshop focused on incorporating specific details into your poetry. I ended up leaving with TWO poem drafts and a super useful process for revision. I really liked how "real" Tim was about how difficult and time consuming the craft of poetry can be, but also he was just so inspiring and encouraging. There were poets of all levels in the workshop -- from Bryce Milligan and Liliana Valenzuela to brand new baby poet undergrads, but I feel it was relevant to all. I also just read today that Seibles was named the Virginia Poet Laureate, and to be honest, I'm not surprised. I feel incredibly blessed to have spent the morning learning from him. There's a picture from the workshop. I'm on the left, soaking up Tim's amazingness. 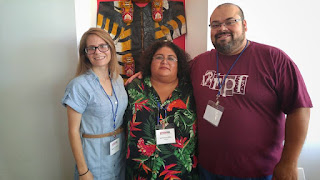 Afterwards, I had a book signing at the conference author's table where I had the chance to chat with some young college students about the writer's career, meet San Antonio writers and even a few publishers and editors. I also sold a few books! There I am, left, hanging out with two buddies, ire'ne lara silva and of course, Edward Vidaurre. Didn't I tell ya I had cool friends?

I would have loved to have stayed longer, but I was on a bit of a time constraint. Later that evening, I had a reading and book signing in Austin, so after a quick and delicious lunch at The Cove, B and I headed up there. We checked into our hotel before making our way to the bookstore. I'd visited the bookstore last spring when I was in town for the Texas Institute of Letters meeting, so I was already at least a little familiar. 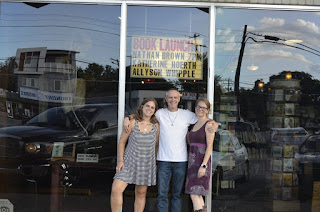 Don't we look happy? I was more nervous than anything else in that picture since it was just before we were about to get started. The reading was a book launch for my friend Nathan Brown's new collection of poetry, My Salvaged Heart (Mezcalita Press, 2016).  He was kind enough to invite me to join him and share a few poems in celebration. Allyson Whipple also shared a few poems, too, from her chapbooks. It was a nice, intimate event. Attendance was a little, let's say light, though, but it might have been due to the fact that the US Poet Laureate, Juan Felipe Herrera, was reading but two blocks down the street. Competition much? Oh well. I had a nice time regardless and met a few wonderful Austin poetry fans. You can view my reading here: 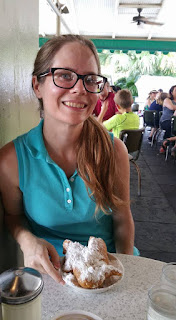 After that, B and I were both pretty exhausted, so we headed back to the hotel for some much deserved rest. The next morning, we went to a few places in Austin, including the Texas State Cemetery and a cat cafe (we're odd tourists, ok?), before deciding to get the hell out of dodge and head for our favorite place, New Orleans. For the next two days, we existed in a bliss of beignets, live music, and good Louisiana beer. My favorite places on this visit were a trip through the Ursuline convent, which had some surprisingly interesting takes on women's history, and a tour of Frances Keyes' home. And of course the FOOD, which kinda sorta still has my stomach in a tizzy.

Today I'm recovering, trying to come down from the marvelous cloud that comes with travel, writing, and community. Hopefully I'll be able to settle back into my routine before the semester and reality hits again in a few weeks. I have so much to look forward to in the fall, but right now, I'm still relishing summer.