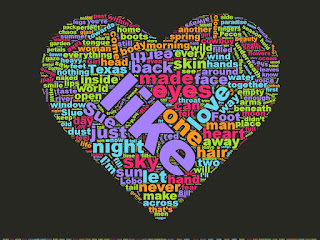 There's my manuscript. There she is in all her neat and pretty glory. Oh, oh, oh, she is a deceptive little turd. I made this image using word cloud, a neat little website that makes a design out of a word or pdf file. I decided, what the heck, I'll pop my manuscript in there, maybe it'll take my mind off the craziness it's become. And it spits out this pretty little neat thing that looks so simple.

Chaos. That's what she is. Chaos!

I spent today futzing with the book again, the order and the structure, and, well, I think I broke it.

And I'm having this crisis as I'm gathering my notes for a talk I'm giving in San Antonio on how to put together a manuscript. I'm going to walk into the conference room and be all like, hey everyone, I have no idea what I'm doing, but here's some advice

Actually, this is a perfect opportunity for me to reflect on the process of putting together a book. This latest collection has posed a few challenges for me, and I feel like it's close to being in good shape. It's original state was like a two-faced book with two separate themes -- personal poems about my recent illness(es), and then more of the whole revisionist mythmaking thing but with Texas legends.  I was going to slap the title of Slue Foot Sue on it and call it a day, hoping the reader would take that leap with me across the chasm that having two separate tones/voices/messages created. It was going to reflect the pastiche of identity, the chaos of being a woman, I told myself, trying to make it sound good.

But really, that was a bunch of bull. I was being lazy and didn't want to admit that all along, I'd been working on two separate books, and that in order to make it work, I was going to have to scrap half and write a shit load more.

I eventually came to my senses after chatting with my mentor, Jan. She pretty much told me as such and, though it took me awhile to accept the truth, I agreed and split the manuscript in two, telling myself the other half could wait until my next book.

And so I got to work on my Slue Foot Sue book, because it felt a little fatter and more developed. Yay. That's what I'd been doing this summer, adding to it. I ended up writing two whole new "Texas legend series" poems to accompany Sue in her book -- Lobo Girl, a feral child case, and Sirena, a Native American Legend of a mermaid in the Guadalupe River. Sue was going to be the anchor story, her poems sprinkled throughout the manuscript, the chapter titles adhering to major events in her narrative. Lobo Girl's was kinda sorta gonna follow suit. Sirena was a little different -- her poems were too connected and needed to be together, uninterrupted, so I placed them in a chapter, but they felt like they didn't quite fit there.

Now I had three controlling narratives, and the manuscript felt, well, a little confusing and out of control. Today, I sat down with B and we chatted about it over lunch. B is not a poet. Quite the opposite, in fact, he's a computer geek. But, I trust his judgement on things in general, and he's always up for some straight talk. I asked him, do you think I should have three chapters, one for each narrative, rather than sprinkling all the poems throughout the book?

That makes so much more sense, he told me.

I groaned. This was going to mean a major overhaul. Ok. Ok. Ok...

So today I tried doing that. Now I've got a Slue Foot Sue chapter that focuses on her narrative, yes, but also imperfect love poems, a Sirena chapter that interrogates the male gaze and the objectification of women, and a Lobo Girl chapter about wilderness and rebellion. And a fourth, tiny chapter about the moon. Because the moon is what all these women have in common, but of course.

So some poems no longer fit -- cut them out. I looked through my "other" manuscript and found a few of the ones I'd originally discarded now could go back in, so I did a little swapping there too.

This manuscript keeps evolving and changing and it's hard to keep up with what's going where and why :-/ Good thing I save versions of stuff.  This weekend, I'm going to follow that old advice, to print out all of my poems and arrange them on my office floor. Would you believe I'm actually excited about it? :)

It's almost there. It's almost there. It's almost there. I have a feeling this book is going to be really good, once I finally figure out the chaos. I don't think I've ever struggled so much with ordering a manuscript -- the other two were much easier, a straight up narrative sequence. This one resists that. Fortunately, the poems themselves have been fairly easy to write because I've just been feeling so inspired and energized. I keep having ideas and I can't shut the faucet off. Not that I'd want to, of course.

Anyway, long story short, I think I'm getting somewhere with this, and I know that in the end, this book will be much stronger through all the struggling it's put me through.