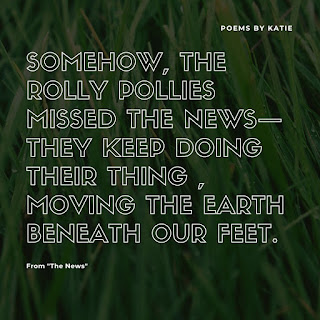 I'm a day behind in my NAPO, but yesterday's prompt was to go for a walk and gather a few things, so I did that this morning before sitting down to my writing desk. I just walked around the yard in my nightgown. It was such a beautiful morning--the birds were chirping and singing and doing their things. The rolly pollies were moving the earth. The flowers were dying and blooming. And life, it seems, goes on, despite the virus and the unrest and the unemployment and our anxieties and worries of the future. So it goes.

Then, I read "Tell the Bees" by Sarah Lindsey. So this became an inspiration and framework for my writing about the world, going on as it where, in spite of everything.

Somehow, the rolly pollies missed the news—
They keep doing their thing in the dirt,
Moving the earth beneath our feet.
I want to tell them, to wake them from their joy,
That the world, as we know it, is ending.
I want to ask them why they keep on working,
Toiling, turning the debris of winter into spring,
If spring may not bloom after all. I want to whisper
Into their little ears, though they probably don’t have ears,
That the world is a terrible, dangerous place—
To return to their slumber, their dens, and ride this season
Of death out behind a mask of earth.

The grackles, too, seem oblivious,
As they screech in the oak trees,
Perch on powerlines, preen their iridescent feathers
As the sun rises this morning and brings them to life.
But the doves are mourning. But the doves are always mourning.
And their mourning sounds the same as any morning.
The mockingbirds, who have a lot to grieve,
Rebuild a nest that tumbled to ground last night.
I want to ask them why they even bother anymore.

I want to tell the old mesquite tree
Before she bursts into yellow blossoms again.
And I want to tell the beetles, the mosquitos,
The flies, the mushrooms at my feet,
And even the stones, though maybe
They’ve seen worse in their timeless lives
Than this. And when they learn, as I have,

That our world is coming to an end,
The rolly pollies will keep on moving the earth
Beneath us, as they have for centuries,
Bringing it back to life.