Napo 3: Playing with Near Rhyme 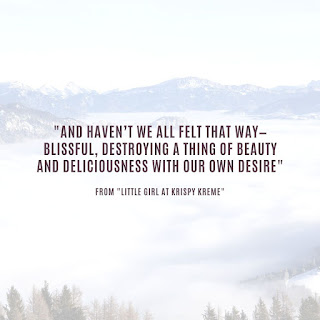 Today's prompt was to play with rhyme and near-rhyme. I actually have come to like writing rhyming poems, especially sonnets. Today, though, I experimented with more loose rhyme. I wrote about a little girl I saw eating donuts at Krispy Kreme a few weeks ago, and in it, I played with rhymes and near rhymes within lines. The effect is more subtle.
Later, I'll go through and pare this down a bit, but here's my initial soundplay draft:

Sprinkles loosed from chocolate icing,
The risen bread of it all pocked and bitten,

Crumbs strewn across the table
Here at Krispy Kreme,
A little girl in a snow hat picks
At donut, her tiny fingers
Creating crags and craters
As she scoops out morsel after morsel
And holds them between finger and thumb
For but a moment before she devours it,
perfectly, nibble after nibble,
In tandem with her breath.
She eats the white part first,
leaves a carapace of chocolate
That she later runs her fingers through
And licks them delicately
like a cat its tender paw.

And haven’t we all felt that way—
Blissful, destroying a thing of beauty
And deliciousness with our own desire,
Gloriously, shamelessly, in the Eden
Of our childhoods when atonement
Was but a big word on scritta paper.

She could be Persephone.
That Krispy Kreme a pomegranate,
These crumbs, crimson arils
Made of magic and juice and nectar,
And no, if I were her, I wouldn’t want
To go back to life before such sweetness,
Before she learned of manners,
the sad morals of stories,
the calories of candy,
what sugar does to the blood.

Chocolate stains her cheeks.
Her fingernails too. A sprinkle sits
at the curve of her lips,
and when she’s had her fill,
The vermillion sanctum of her hunger satisfied,
She sets the half-eaten donut down.

She has faith that life will bring her more,
that she will deserve the joy it brings,
And oh, how glorious that faith must be.

She gazes out the window at the universe of snow
Dreams of leaving this warm paradise
Of florescent lights and the scent of coffee,
For the park, her sled, a tranquil day of adventure.

I hold her face like a memory,
Gaze at her as though she were a broken mirror
To my history as I neatly sip my cappuccino,
And I dream of the foggy froth
like my own December mornings years ago,
Of donuts, chocolate milk, and endless afternoons
Of sledding at the park,
The bright sun glimmering into infinity.
I lose myself in reverie.