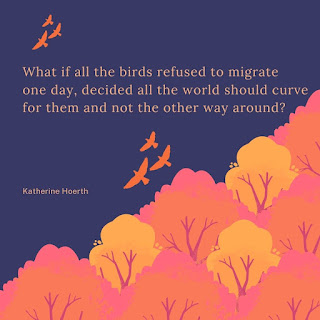 I'm baaack! I can't resist the 30/30 challenge, and it seems like the perfect time to return to my blog and keep a record of my rough drafts. My really rough drafts. Let's see if I can do 30/30 this year, 2021. Before, a quick update from the KatieSphere.

Has much changed in the past year? Not really. We're still in pandemia. I've got my COVID-19 vaccine. I'm still teaching from home. I'm weary of the outside world as it tries to reopen again.

Another perfect season for poetry? I'd say so. Here's my first NAPO, inspired by a prompt from the napowrimo.net site and the writing of Monica de la Torre, whom I've been reading and thinking about lately:

What If All the Birds Refused to Migrate?

What if all the birds refused to migrate

One day, decided all the world should curve

For them and not the other way around?

That they were tired of the rushing every season,

Of living beak to beak, the season’s ability

To feed them diminishing each year?

Tired of being devoured by feral cats in cities

Or searching endlessly for crowns of trees

To build their nests amongst the urban sprawl?

Sick of eating all the insects hatching in the south,

An endless task of cleaning up, like a mother

With a broom, the kitchen floor, and cheerios.

Fed up with bullets clipping wings

During dove season, of losing so much,

A mate, a child, a sister, a mother

Then a dule. Exhausted from the migrations,

of moving, changing with the world, as climate changes

And the rushing to adapt, to make it work,

Oh God, one more disaster coming at us

Expecting me to move aside. What if a bird decides

She won’t fly away for once, won’t let her feathers

Be ruffled by the changes in the wind?

What if all the birds collectively decided

This together, to stay put, to stare

Their predators in the eye in flocks,

Demand the wind cater to their appetites

For once, remain in bed on Sunday afternoons

Instead of building nests or tending eggs or

Planning for the next move survival deems

They have to make or else they’ll die,

Be eaten, starve, or freeze. My God,

Our ecosystem would collapse

Who give it wings to fly.

The idea behind this poem is comparing birds, collectively, to women. How we're expected to bend to the whims of the world, accommodate and make space for masculinity to have its way and sway, and also how capitalism functions to not really empower women but exhaust us. I wonder if the birds feel that way, too, with climate change and their migrations becoming more treacherous every year? That's the impulse, the seed, or maybe the egg if you will, of this poem. I'm really into the concept of ecofeminism lately.

I actually think I might revise this into a villanelle? What a refrain: what if all the birds refused to migrate? That's my idea for later!