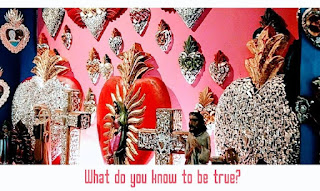 Today's prompt was to write about something I know to be true. I decided to write about a fact that I USED to believe, but now we all know isn't true anymore, that Pluto's a planet. I started thinking about the mythology of Pluto and Proserpina, or Hades and Persephone, how that myth "shadows" the way we feel about the ways men and women interact. I think it's interesting that Pluto's not a planet anymore, kind of in the way that men can't dominate women anymore. For me, Pluto being a planet symbolizes patriarchy. It turns out these "laws" both as they relate to Pluto and gender relations are mere myth.

Pluto’s Not a Planet Anymore

It hung over your head, as a girl—
Pluto, the shadowy planet
Orbiting out of sight, but always in your mind
Millions of light years away.

Imagine that umbra, casting darkness
Over everything—world-sized, enormous,
Heavy always on the shoulders
That someone, somewhere, evil lurks
In waiting for the moment you flash spring
From your lips like a smile.

You spent your childhood
Believing this lie, a fact
Lodged between your teeth.
Not a fact. Not a planet.
Nothing to fear,
But a lifeless rock
Orbiting through emptiness,
An afterthought to your spring,
But a myth in the grand story
Of the galaxy’s splendor.

You, on the other hand,
Once an insignificant girl
In science class, holding back
The floodgates of spring and beauty,
Speaking in the soft whispers
Not the roaring winds of March,
Or the thunderclaps of April
That filled her belly, now
A woman with a universe within her.
Who’s the god the goddess now?

And they’re everywhere, those girls,
Afraid of stepping beyond the bounds
Of good behavior, that shadow might
Sweep them up and carry them away
Into some underworld that must exist.

Girls, it’s just a myth. Truth’s a slippery word
Falling from your hesitating lips.
Lift up your voice.

Bloom, oh millions of Proserpinas.
You have nothing left to fear.
Pluto’s not a planet anymore.