By Katie - September 29, 2011
Just in case you missed the flash mob poetry event, Sunfish Records was kind enough to get a video of me!

Ok, so a journalist from Reynosa was there and wrote an article in La Manana. But the best part? My picture is there! Would you like to check it out? Of course you would!

Read about Katie in Spanish

So now I'm feeling cool. Why don't I leave you with a beautiful picture of the talented poet Kamala Platt, who also read at the event. 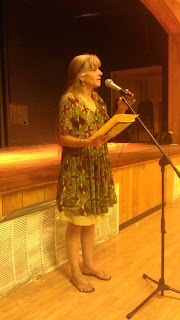 Kamala Platt at 100,000 Poets for a Change
﻿
There's a lot coming up. This is exactly why I love the fall. Keep an eye out for future announcements on all the exciting poetry stuff I've got planned :) Well, to me it's exciting anyway.
I'm off to think of new ways to torture my students (as if hammering MLA into their little heads wasn't enough).
Adios!﻿