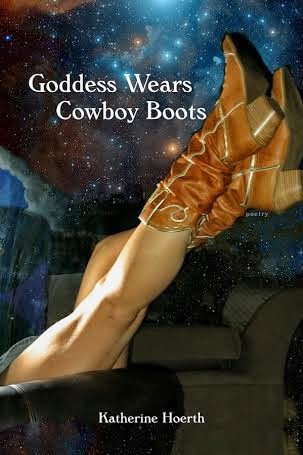 Lamar University Press will be publishing my next poetry collection, Goddess Wears Cowboy Boots. I am over-the-moon excited for this. Its tentative release date is September 1st, which is incredibly soon. To launch the book, I will be presenting at the Langdon Poetry Weekend in Granbury, Texas.

The book will be available through Amazon and Barnes and Noble, and I will likely have an armful of books wherever I go :-)

So how did this come to be? Well, let's take a journey down memory lane, shall we?

It was late 2011. I was feeling this mixture of elation and depression about the acceptance of The Garden Uprooted. It's a little tough to explain, but my first book was something I had cherished and worked on for years, all my years in grad school and beyond. It was my identity as a poet. And it was out of my hands, gone.

I needed something new to obsess over, something new to strive for, so I began writing. I remember I was going for a walk at the university to clear my mind, and I had an idea to begin writing poems about goddesses, revisionist poems. The Garden Uprooted dealt with re-visioning fairy tales (among other things), so it really didn't feel like something entirely new. I wanted to re-imagine goddesses doing everyday things, bringing the holy and mighty down to earth in a feminist kind of way.

So I wrote. And I wrote some more, all through 2012, I didn't dream of pulling any of it together just yet. Anyway, I was so focused on marketing and selling TGU that the thought of another full book made me, well, cringe a little! So I just wrote a mess of poems about my theme, and ultimately, tried to have fun with it.

When 2013 rolled around, I felt like I was ready to start assembling the pieces together. I spent that summer putting together a chapbook that I sent off to a handful of small presses. I got some very kind rejection letters, made finalist in a contest, but had no solid leads. No worries, I thought to myself, I'll just keep writing.

Then, earlier this year, I was researching different presses to contact for my book review column, and I came across this one, Lamar University Press. I had actually read a handful of titles from them before, and I really liked the kind of works they were championing over the past year or so, particularly the work of Jan Seale and David Bowles -- two fellow South Texas poets. I noticed that they took unsolicited queries in June. It was February, so I penciled them down for a submission around that time, thinking, sure, I could have a polished and completed manuscript ready by then.

I contact the editor for some review copies, and within an hour, I get a response. I have to read the email like 50 times to believe what I see -- that he's a fan of my work (reviews, blog, and poetry!) and that he would like to see a manuscript! And that, of course, he would be happy to send me review copies of anything I wanted.

Let the dancing commence! Who could pass up an opportunity like this? An invitation to submit? To a university press? I spend the rest of that weekend putting it together my submission, and then send it off. I try try try not to think about it, obsess over it, but I'd be lying if I said I wasn't. In fact, I couldn't think about much of anything else.

Months go by, and nothing. Hmmmmmm, I think to myself, looks like he didn't like the book after all. Which, to be honest, didn't surprise me. Goddess Wears Cowboy Boots is a pretty feminist text, and, well, it's probably not every press's cup of tea, and the editor I was in correspondence with, Jerry Craven, is, well, a dude... so...

In May, I hear back. It's a rejection letter, but a nice one. The book was just too short for their tastes. Fatten it up, he said, and resubmit.

So that's what I did this summer. I spent the majority of May and June totally immersed in creating. The timing was pretty much perfect because I wasn't working, and I had way too much time on my hands anyway. I write on similar subjects, about the four goddess "tropes" that comprised four sections. By the time I go back to work in July, I resubmit.

Only to have the same response a month later -_-; Fatten it up, and resubmit again. Luckily, though, in that month, I had been a busy bee writing, starting on my next, new manuscript, so I was able to add on without much trouble. And off it goes again!

And finally, a yes. Phew! I got the news about two weeks ago today.

It's been an interesting journey from conception to publication for this nifty little book. Since February, when the manuscript was first solicited, I've been DYING to shout this news from the rooftops! Every time someone asked me, "SO... Whatcha workin' on?" I'd have to bite bite bite my tongue, because nothing was official, of course. I'd only told a handful of colleagues about my adventures with LUP, and with everyone else, I felt like I was keeping a dirty wonderful little secret :)

Today, I approved the final proof, and it goes to the printer tomorrow. I am beyond excited about this book and I am really proud of what me and Publisher created. Now, I just await holding the book in my hands. And of course, the cycle will begin again, and I'm already scratching my head for a new idea for a book, but for now, I think I'll just revel in the wonderfulness.