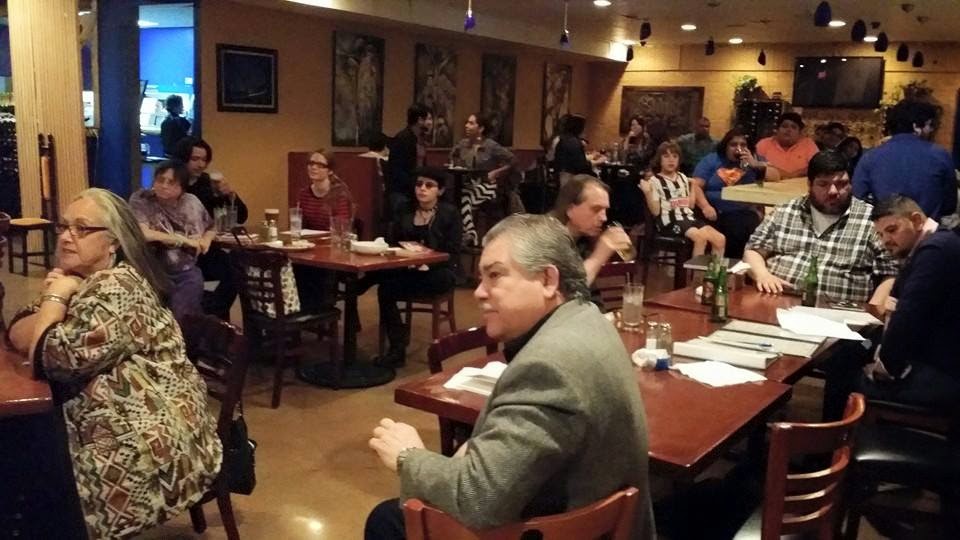 Today's going to be a bit of a quickie. Why? Well, because I'm meeting my partners in crime Linda Romero and Ileana Garcia Spitz for coffee chats. Yay girl time!

But before I scoot off to that, I wanted to talk about a little event that I attended to kick off my spring break, which is sadly now coming to a close.

Poetry Pasta and Vino (known as PPV by those who love it) celebrated its fourth anniversary last Saturday. Fourth anniversary? My goodness, I'm starting to feel old. I remember the first PPV reading back when there was a Johnny Carinos in McAllen.

So as we often do, the poets of the Rio Grande Valley gathered to share their works, good food, and drink. Though PPV has moved venues several times, what doesn't change is the spirit. It's all about community, about art, about celebration. This time, we had our reading at Sahadi's in McAllen.

It had been awhile since I'd attended a PPV event, and this time, I decided to read some new works. I read two poems about my illness, which probably wasn't the most celebratory or upbeat, but, well, I'm not always feeling celebratory and upbeat, so there.

B came out to support me, and we enjoyed two lovely beers. It was a laid back and nice evening. Odilia Galvan Rodriguez was the featured poet. Even children took the stage and read a few of their adorable pieces.

And, as promised, here is poem #4. Tomorrow's the last day of the challenge, so I'll be back on more time before my life gets complicated all over again :-)

You have to sweep them underneath the rug,
or chase them back into the crevices
they came from.  Colonies of sugar ants
creep in to catch the crumbs too small to see.
A silverfish has deemed my shower drain
his home, and can’t you hear the crickets sing
each night? They’re not outside. I try to sleep
as moths’ heads clink against the chandelier
I left aglow. The daddy long-legs feast
upon the crowds; I brush their webs away
each morning from the kitchen’s every nook.

A home is never free from creeping bugs
and it’s impossible to kill them all.
To live, sometimes you have to close your eyes,
pretend that everything’s ok inside
and make the ugly traces disappear.

I ask about your day or what’s for lunch
and not the chaos of what’s underneath
that placid face, the thumping of my heart –
a spec of flea dirt in the bed sheet’s wrinkle,


the cockroach nestled within the duvet.