Napo 9 and Our AWP Panel recap! 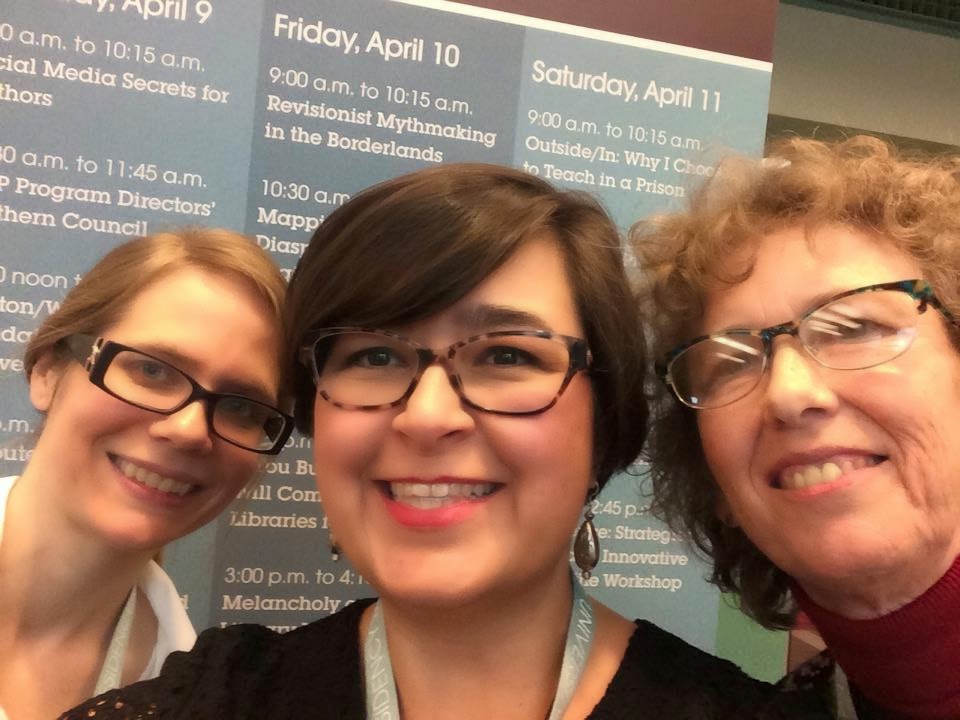 So, these past few days have really been amazing...

On Thursday, I left town to head over to Minneapolis for the AWP conference.

In short, I had an amazing time, though there was so much more I wanted to do. On Friday morning, I moderated a panel on Revisionist Mythmaking in the Borderlands. My other two panelists were Robin Scofield and Celina Villagarcia. The panel itself went better than I could have imagined. Though I was incredibly nervous at the beginning. I introduced our topic, explaining about Mouthfeel Press, what Revisionist Mythmaking was, and why we feel it's important as women in the borderlands to reclaim these narratives.

Robin Scofield read a series of really interesting poems from her collection, Sunflower Cantos, about a woman traveling through the Borderlands region, encountering all of these stories for various different mythologies. I loved it, especially the connections to native mythologies, because I think that's something we often overlook in conversations about mythmaking.

Celina was up next. Oh. My. Goodness. She is such a character. I loved her the instant she opened her mouth. We were short two panelists, so she threatened the audience that if they didn't ask questions or spark conversation, that we were going to show them pictures of our cats and dogs to fill the extra time! Luckily, we didn't need to do that, though I'm pretty certain it wasn't an empty threat :) Celina read from her collection, Pulp, which revisions folktales and legends from the borderlands. Her work reminded me so much of home, but from a fresh perspective.

I went last, reading from Goddess Wears Cowboy Boots. I read a handful of my favorite Tex Mex goddess poems. It's always a little scary to read poems to a new audience, so nerves.

And then, our panel finished. A few crickets chirped for suspense. And then...the panel morphed into this really interesting, deep and real conversation about appropriation, feeling like an impostor as a writer, in terms of gender, culture, and even in academia. It was just, in one word, amazing. This one young woman asked Celina about her background, about why she chose not to pursue an MFA, and if that made her self-conscious as a writer. Celina laughed, said it just wasn't right for her, and that it's not the path for everyone to take, it's a personal decision. But in the end, yeah, she felt like a bit of an impostor here on the panel because she didn't have those academic credentials. Robin explained that, as a woman not working in academia, that she felt that too, and would especially get disparaging comments from other writers about not belonging. I chimed in, too. I feel like am impostor everyday -- I have an MFA. I'm a professor. But still, there's this sneaking suspicion that I don't belong, that I don't deserve the badge of poet, of writer, of smarty-pants.

And yet, there we were! Sitting on a panel, talking to a room full of talented, amazing writers, giving them advice.

It's a never-ending struggle, accepting yourself.

My personal favorite moment of the panel was when someone in the audience asked, "Do you ever feel like, that by rewriting myths, you're not creating something new or original?"

I responded, explaining that really, today, nothing's totally new anymore. We're all writing in response to something else, furthering the conversation, pushing it forward, rather than reinventing it altogether. The wheel's already been invented.

But then, a man stood up, and introduced himself as an editor of a literary journal, Free State Review.  I had never seen this man before in my entire life. What he said made me blush beet red. He explained how, when sifting through his slush pile, he'd come across the most original poem he'd ever read about Eve making a sandwich for Adam. He pointed to me. "Katie there is the author. We ran her poem in our latest issue."

Anyway, the panel was an absolute success. Another person asked where our table was at the bookfair. Unforunately, MFP wasn't there at the conference, but I mentioned that we all had a few books for sale. After the panel finished, we were swarmed (no exaggeration) by audience members who wanted to chat and buy our books. I sold out within ten minutes. We actually had to be kicked out of the room because our amazing conversations continued after the panel discussion was officially over, so we chatted it up in the hallway.

I'll post more about my experiences in the coming days. In the meantime, here's my next Napo. Totally a freewrite, but whatever.


Imagine that our love is just a garden –
It’s easy to make it bloom in spring,
The hordes come out, stiff-gloved,
Ripping the price tags from their sun hats,
Bags of soil, of Miracle Grow in their arms.
Anyone can fall garden in the springtime.
lantanas bloom because they must,
the air is heavy with everybody’s pollen,
the body aches to be outside, soak up
the gentle sunshine, pluck a couple early blooms
and stick them in her auburn hair.
The first flower opens, a stamen
Slips Into the lips of March,
and your world changes, the flowers