It's always an interesting time of the year for me, May is. There's this strange peace to it, and at first it always feels a little eerie because I'm so used to being ridiculously busy. This week, I'm finalizing my grades, and then I'll be off with absolutely no schedule, no to-do list, no obligations for at least two and a half months, maybe more if my summer classes don't make. What am I going to DO with myself? Why, write of course!

Anyway, I want to take a moment to look back at the crazy month that was April before setting goals for the next little chapter of my life. I survived, which was a pretty amazing feat come to think of it! Last month, I presented at AWP, attended the TIL awards banquet in Houston, wrote and read a poem at a friend's wedding, and of course, participated in VIPF. Not to mention working. And writing! Though I didn't QUITE meet my NAPOWRIMO goal, I'm pretty darn proud that I was able to maintain a semblance of a writing routine in the craziness of April. I wrote twenty-two shitty first drafts of poems. Not bad!

When I last left off, I was basking in the afterglow of the anthology release party. So, I'll pick up there, the following day, on Friday, April 24.

The next day, Mary Ann Escamilla and I were set to the task of hosting a Poets in the Schools event at UTPA. Daniel arranged for two of the featured poets to join us, PW Covington and Shirley Rickett. Before the reading, we arranged to meet up with the poets for a informal lunch in the student union so we could all get to know one another, powwow about the event, and of course, just shoot the breeze. It's always fun. 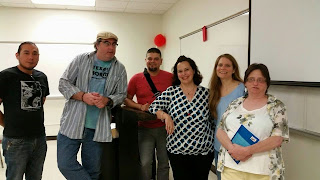 Then, at around 2, we all headed over to the classroom. Our readings are never terribly fancy or formal, but I kind of like that about them. We had a handful of students join us as audience members, and one was even brave enough to read a piece at the "open mic" or maybe I should call it an open podium :) One thing that always surprises me is how varied everyone's poetry is. PW shared his Beat poetry with us, smooth, prosy, and filled with these short blasts of lyricism. Shirley, on the other hand, shared a lot of nature poetry, but nature poetry that branched (hah) off into issues of culture, migration, and language. Her poetry is tight, succinct, dense, and always beautiful. I was wrangled into a reading a piece, too, just because we didn't have many takers on the open mic and, well, it's not too hard to convince me to be the center of attention once in awhile. There we are in the picture, the merry bunch of us! From LEFT, Javi Tovar (?), PW Covington, Cesar Deleon, Laura Pena, ME, and Amy Becker Chambless.

Anyway, after the reading I headed home for some much needed respite. I laid on the sofa, did a little writing, kissed my cats... the usual Katie routine. Though, before long, it was time to head over to The Flying Walrus, a bar in downtown McAllen, for our poetry slam.

When I arrived, the bar was actually still closed, and Daniel and some of the other poets were setting up the stage. It probably looked really unfeminist of me, but I pulled up a chair, kicked up my feet, and watched the men do all the hard work. I'll blame it on my back, which actually is a pretty valid excuse because I'm not supposed to lift anything more than ten pounds :D I digress.

The readings got started in short order, and I was fortunate to participate in the "college readings" as university faculty. It was a little special because my former professor and current colleague, Emmy Perez, introduced me and said how proud she was of me :) At my first VIPF, when I was still her student, she said the exact same thing! I was just thinking about that... it was just after my first chapbook was published back in 2010. I'm digressing again.

Next up were the featured poets -- Shirley and PW again, and then Amalia Ortiz, who's an MFA student at UTPA and also a renowned slam poet.

Now, I'm not a slam poet. And I don't mean that in a pretentious way at all. I admire poets who can slam, and I think it's an amazing form of art that reaches out to a wider audience. I don't believe there's this divide between slam and academic poetry, though, and I think Amalia's performance proved just that. She performed some amazing work, intermixing feminist issues with Greek mythology and pop culture/current events. I left inspired.

By the time the actual slam was getting going, I was starting to feel a little achy, so I ended up leaving a little early. A newbie (At least a vipf newbie) was crowned the champion, so that is awesome to hear we've got some new blood in the mix!


Of course, Saturday was the main event. My first reading was scheduled out on South Padre Island, which is about an hour and a half drive from my house! Yikes! And guess who got up late? Yeah.... 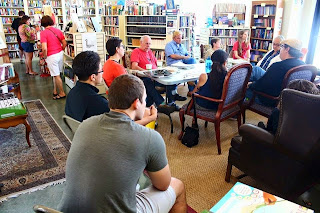 Anyway, B and I went together because after the reading, I promised we'd stop at his favorite burger joint. The reading was at Paragraphs on Padre, which is probably my favorite venue in all of the festival (the only place that comes close is Schneider's, which wasn't a venue this year anyway). It's the cutest, coziest little bookstore with the most charismatic and friendly owners. I just love it there. This reading felt more like a conversation than anything else, which was really cool! I know in the picture I'm staring off into the sun. I also sold a handful of books, and, as per always, spent my riches on, you guessed it, more new books. Woohoo!

B and I spent the afternoon on the beach, and I missed my next reading in Harlingen, which is just as well. I didn't really want a fast-paced day, so taking a slow walk along the beach and having a leisurely lunch at Burgerfi was pretty much the perfect way to spend the day.  Plus, that night, of course, was the pachanga! Oh, there I am, enjoying my quinoa burger, onion rings, and IPA! 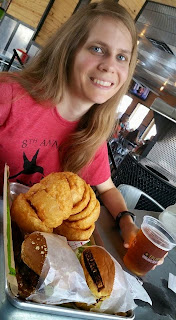 When I finally make my way back to the upper valley, I head into the McAllen Chamber of Commerce, the venue for the pachanga. I'm greeted by friendly faces and delicious vegetarian tamales. Is there anything better? No, no there is not. Before the readings begin, we all share a wonderful dinner and conversation. I had the pleasure of sitting and chatting with Odilia Rodriguez!

The actual Pachanga readings went off without a hitch. The featured readers took the stage first. It was the first time I'd had a chance to hear Cindy Rodriguez read her work, and my oh my. Needless to say, I had to get my grubby little hands on a copy of her book before the night was over! I actually bought a bunch of books at the pachanga that evening, and sold out of all of mine, which is good and all, except, well, I didn't have anything to READ off of at the pachanga! I had to recite a poem from memory, which I wasn't entirely confident about because I hadn't done that in awhile. But I was able to do it just fine B-) Here I am with Daniel Garcia Ordaz, founder and organizer extrodinaire. He introduced me in the kindest of way, mentioning my award and making me feel all warm and fuzzy. I said that I got my start here at the festival! And it was true. Me and this festival? We go way back to when I was a clichéd baby poet who didn't know her anapests from a hole in the ground. 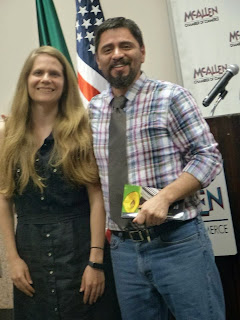 The coolest thing, I think, about the pachanga, is that you get to hear EVERYONE, all of the featured poets, share a single poem at the mic. Again, so much range in styles, voice, and approaches, but it's so inspiring, too! We're all poets. We're all sharing our view of the world. And there's something essentially beautiful about that.

By the end of the night, I was exhausted. I was glad to head home, hop into bed, and spend my Sunday just relaxing :)

So another VIPF is in the books. This year, I was just an enthusiastic participant rather than an editor or an organizer, but seeing the festival from that end was just as wonderful. I simply enjoyed it. Plain and simple. I reconnected with old friends. Met new people. Talked poetry. Felt like I was a part of a community. All good things. All essential things. I can't wait for April to come around again!