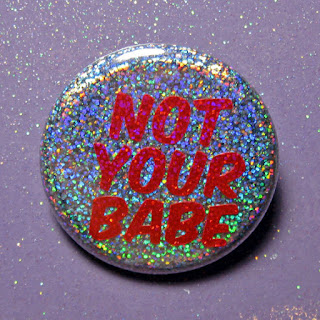 And I think it's pretty clear, at this point, that I'm a woman.

And apparently, it's hard to be a woman doing anything because misogyny exists, and it manifests all the time, sometimes in humorous ways.

Take this, for example:

A male submitted a poem to me. The poem's title was something along the lines of "Drunk Poem."

It was bad. Not offensively bad, but, well, bad. I send him my customary rejection letter, which goes something like this:

"Thank you for your submission. I appreciated the chance to read "Drunk Poem," but it's not a good fit for our journal at this time. I wish you the best of luck in placing this piece elsewhere. Sincerely, K"

To which submitter responds:

"Thanks, Babe. What kind of poetry do you publish, then?"

At first, I chuckled. How ridiculous. It reminded me of Rush Limbaugh. Or even something Donald Trump would say if a woman rejected his poetry (harharhar).

And then I thought about it for a microsecond more and realized that this is kind of troubling. Not troubling as I'm so troubled I'm offended, persay, but troubled as in what it means exists in our society, particularly in editing. This male submitter responded by calling me "babe" which is a problematic word -- it infantalizes me, knocks at my position of "power" as a woman. It suggest something about my physical appearance, too, as if that's more important than my editorial vision for my journal. It genders me. It puts me down. It's an insult, really. I'm not a babe. I'm not a child. I'm an editor with a brain who knows things, who knows what good poetry is, and who knows that "Drunk Poem" isn't it. It's illustrative of a greater problem in the way society and many men, including in the literary world, view and treat women. If we don't realize their greatness, then it's clearly because our lady brains aren't mature enough to do so.

I posted our exchange in my women poets facebook group, and I got a pretty wonderful uproar of a response. Some of my personal favorite suggests were to send him an anonymous bag of dicks (made of gummy bears), to call him "sugar balls," or to simply respond with, "your mom's."

I've elected to take the advice of many women. This submitter likely wanted a rise out of me, and I wasn't going to give him that. I chose to ignore it. And in the future, I probably won't pay very close attention to this submitter's poems. I googled his name and found that he's not really a well known or published poet, so I figured it would just be best to leave it at that.

Perhaps most disturbing, though, is that this anecdote ignited a conversation about how pervasive this kind of behavior in the literary world is. One of my friends PMed me to tell me about a submitter who, after receiving a rejection letter from her, continues to email her pornographic story synopses, asking if she likes them. Another women posted to the thread that she once received a rape poem from a male submitter, and in the cover letter, he sent a date request. And there's anecdotes everywhere about similar behavior.

When is it going to stop? Never. That's when.

I'm able to laugh off the minor "Babe" incident and move on. What I'm not able to do, though, is accept this kind of behavior, trend, and language as status quo. We, as women, shouldn't have to expect to be treated badly because of our gender. But we are. And language matters. And the only answer is to keep writing, keep being a badass, and keep having conversations about everyday misogyny that exists. Yes. It exists. I swear it.