In the Works! A Book Release Party! 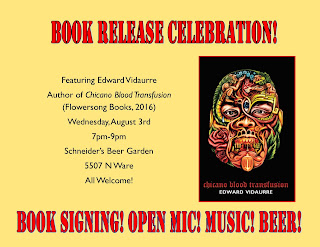 I'm excited (And a little nervous) to announce that I'll be putting together a book release party for my good friend, Edward Vidaurre, in early August at Schneider's Gasthaus. My neighbors recently purchased the restaurant from the previous owner (who also allowed me to host readings there from time to time), and have been asking me to put together an event with the local poets since day one. Being a little preoccupied with life, I'd been putting it off, until a couple of weeks ago, while sitting on the Gasthaus patio enjoying a beer, the owner approached me again with a frown on his face. "You ever going to bring your poet friends, Katie?"

Ok, ok, ok, you twisted my arm, not that it really needed much twisting.

Depending on how this reading and release party goes, I'm toying with the idea of making this a semi-regular thing. Maybe a Books and Beer quarterly reading, celebrating new books released by local authors. Dunno. I get super busy and during the summer, I always have a little free time and dream up new work for myself to do. But whatever. This is kind of important, especially the part about supporting other writers and helping to create a cohesive literary community. And there's nothing like a little alcohol to do that, am I right?

The last time I hosted a reading at Schneiders, it was a resounding success (IMHO of course). I was celebrating my students' accomplishments that semester, and the local poetry community came out to essentially usher them into our circle. It was well-attended by writers, students, and even my colleagues from the university. I hope to replicate that atmosphere in this coming release party; we shall see how it goes.

Anyway, I've let Edward chose the special guest readers, because it is HIS party. And we're going to also have an open mic to allow everyone an opportunity to share their ideas and works. I'm really excited to see how this pans out, and hopefully, it will be the first of many events I organize at Schneider's Gasthaus.