The End of a Chapter! 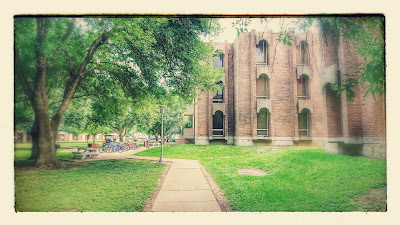 Once upon a time this was my home. Literally! I lived there in the UTPA women's dorms back in my undergraduate days.

Today marked my last day at UT-RGV/UTPA. I spent the day packing up my office, walking around campus, and reflecting on what all this means. It's amazing how much one can be shaped by (and shape) a place. This institution has been a major part of my life for the past thirteen years, so saying goodbye is a little tricky. I thought this might be a good time and space to look back at what UTPA/UTRGV has meant for me, how I've grown, and hopefully, too, how my time here has benefited and shaped the university as well. So stroll with me, will you, down memory lane a bit?

This story goes back to 2004. I was seventeen, graduating high school, and was genuinely in love with life. I went to high school just across the street from campus. I ended up at UTPA for an incredibly practical and impractical reason. 1. They offered me $$$ and a free dorm room and 2. My first choice school, UT Austin, required me to attend a summer session, and I had a graduation trip to Europe planned during those dates. Initially, I wanted to attend UTPA for a year and transfer out, but life has a funny way of grabbing you by the arm and directing you  towards your destiny. 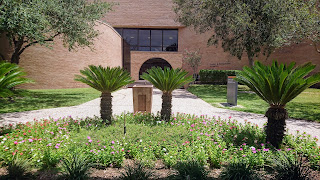 On my first day of classes, bright and early in the morning, I went to my anthropology class. I arrived a bit early, and low and behold, there was an incredibly sexy man sitting towards the front of the room! Well! Don't mind if I do. I took a seat next to him. Though it took said sexy man half the semester to actually speak to me, the rest is history. That's how I met B! And we've been inseparable ever since. That building to the left? That's where we met! So as you can see, it's pretty darn special to me.

As an undergraduate student, I took creative writing and literature classes and had some really wonderful professors that helped me thrive as both a student and as a writer. My first English class was with Dr. Caroline Miles, who helped me understand what feminism was. I took courses with Emmy Perez who introduced me to actually writing poetry. My favorite class was probably an editing class. Our project was to edit the school's literary journal. I got to serve as editor in chief! :)

When it was time to graduate in 2007, I decided to get my teaching license. But also, after speaking with an academic advisor who encouraged me to return to graduate school thanks to my high GPA, I decided to also pursue my MFA in creative writing. Really, I just wanted to keep writing poems. 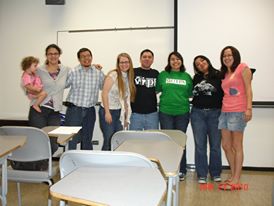 Ok, this picture is a blast from the past, but I think it's illustrative of my MFA days. There I am with my classmates, in the same building as above, the SBS (now called ELABN). We were all speaking on a panel at the annual FESTIBA festival of books. I think I was talking about putting together my first chapbook, Among the Mariposas. This was probably sometime in 2010. Pictured there: Erika Garza Johnson (author of Unwoven), Isaac Chavarria (author of Pocho), Me, Daniel Garcia Ordaz (author of You Know What I'm Sayin'), Virginia Torres, Lady Mariposa, and Lauren Espinoza. 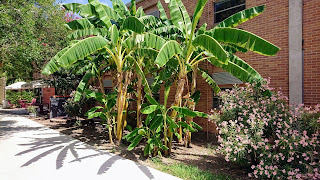 This next picture is of Southwick Hall. I would be lying if I said doing my MFA was easy. It wasn't. In fact, I dropped out for awhile in 2009. I was overwhelmed with life, with working, handling my finances, being an adult. I wasn't happy with the work I was producing, and I had this crushing sense of impostor syndrome/self doubt. When I talked to a poetry professor about my problems, she suggested I leave the program. And I listened. I don't know if it was good advice or not. I probably needed a pep talk and I didn't get one. But in the end, I probably needed that semester away. During that time off, I found a new job. Hence, Southwick Hall! I started working as an Academic Advisor at UTPA. And once I got settled in with my new job, I decided to give this whole grad school another shot (thanks to an employee tuition waver, so why not right?).  I returned to school and wrote poetry with a vengance. I wanted to prove to my professor (but mostly myself) that I belonged here, that I was a real writer, and I was going to graduate! 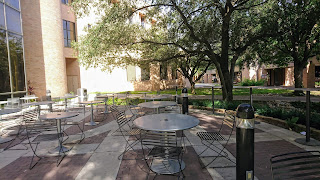 From 2009-2011, I worked as a full-time academic advisor during the day and went to grad school in the evenings. It was a really wonderful time in my life. I had amazing co-workers, amazing classmates, and fantastic professors. Dr. Steve Schneider took me under his proverbial wing and mentored me as I worked on my thesis. "I'm going to publish this manuscript!" I told him, and he just replied with a simple, "I know you are." To the right, that's the Jazzman Cafe, a place where Advisor and I would meet to talk about thesis. And after that about teaching. Or my career. Or my writing. In fact, we've continued our mentoring coffee chats up until last spring.

I graduated in spring of 2011 and kept my job as an advisor. BUT! I also got an adjunct position at a local community college in the evenings. In 2012, I met my soon-to-be editor at a poetry event, and after a few conversations, he solicited my thesis manuscript. By the end of the year, The Garden Uprooted, my first full poetry collection, was published. I got the news while sitting in my little office there in Southwick Hall. I closed the door and danced. 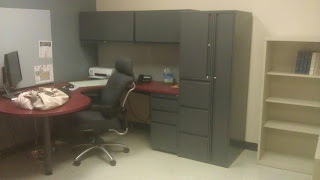 In fall of 2012, I was hired on as a full-time faculty member in the English department. I was an emergency hire to replace another faculty who had quit during the summer, and the position was just supposed to last for a year. It was a literal dream come true. To the right, that was my first office in the English department! I was so proud of myself, ridiculously in fact. My first semester, I taught five stinkin' sections of Composition 1. I was on campus teaching five days a week. I loved it. 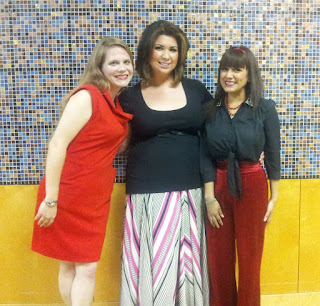 I wanted to share this picture, too, to show you that it wasn't all work. To the right, that's me, on the cast of UTPA's production of The Vagina Monologues.  I also did a ton of writing, mostly during the summers. In from 2012-2014, I wrote Goddess Wears Cowboy Boots.

Luckily, my job ended up not just being a one year temporary hire thing. Instead, I was rehired after a year for another temporary stint, and then in 2014, I became a "permenant" faculty member. I was so happy! Eventually, too, I was assigned different classes, including, perhaps most significantly, Creative Writing. I taught my first creative writing class in the summer of 2014. Actually, I got the news about publishing Goddess as I was teaching that class! :) 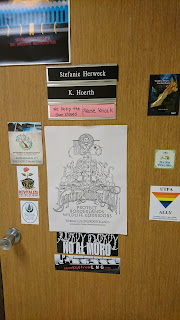 At UTPA/UT-RGV, I've mainly been a stand-in for when the tenured creative writing faculty get leave and they need a class covered here or there. These classes gave me a little taste for my real passion, not only being a creative writer, but helping and empowering others to find and hone their voices, too. And that's when I realized what I REALLY wanted to do with my life! My students helped me figure this out as I'd live vicariously through their successes and watch them go from shy unsure scribblers to confident poets willing to take the mic and share their works. It reminded me of my own journey. And also, that I wasn't done growing.

As much as I wanted to remain at UT-RGV, it soon became obvious that, if I wanted to continue to grow, I wouldn't be able to do that anymore. So, reluctantly, I began scoping out the job market. Which leads me to here! Cleaning out my office and getting ready for that next chapter!

Today was incredibly bittersweet. My life has been shaped so much by this institution. It's where I met the love of my life. It's where I found my way as a professional. It's where I've discovered my voice as a writer. I'm not the same seventeen year old girl from back in the day. UTPA/UT-RGV, you've made me into the strong woman I am today. Truly. Thanks to my professors, my colleagues, my peers, and my students, I've found my direction in life. And sure, my relationship with this university has had its ups and downs. But in the end, I'm incredibly grateful to have begun my journey here.

This place has been such a fixture in my life, so saying goodbye is scary, sad, and exciting too. I hope I gave back to this community, too, through my teaching, service, and writing. I hope I've not only been shaped by this university, but that I've, in some small way, shaped it, too. Goodbye, UT-RGV! 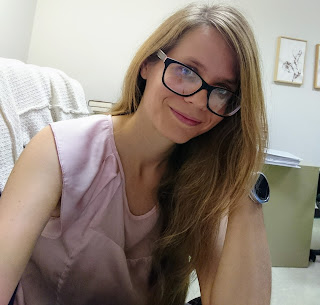