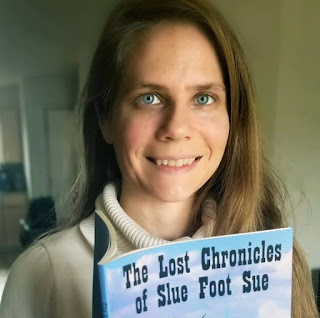 The New Year began without fanfare for me this morning. B worked the graveyard shift, so I spent the evening at the apartment with the cats. At midnight, I was at my computer, writing a poem. It isn't a very good poem, but it was a good way to begin 2019.

With a new year, I'm naturally reflective. Lately, I've been feeling a little negative about my progress as a writer. 2018 didn't feel like a monumental year, but it really was. Since beginning my vacation, I've been having some health issues again, so my output hasn't been where I'd like it to be. I started having my usual stomach trouble and an uptick in my migraines, so I figured it was a good excuse to find an new doctor in the Houston area. She was concerned with the frequency and intensity of my migraines so she's sent me to a neurologist. Then, during a physical exam, she found an "inflammation" in my abdomen, so she ordered some tests, and after getting the results, more tests. Bleh. So my life has consisted of doctor appointments, tests, studies, poking, prodding, and perhaps worst of all, my own mind ceaselessly leaping to the worst conclusion. The saga continues. So, I haven't been writing as much as I'd like.

But, last night, I began thinking about what 2018 had been, what I went through, and what I learned as a writer and as a teacher. In the end, it WAS a pretty good year. Here were the goals I set for myself this time last year, along with how I did on each front:

I didn't publish a damn short story. Haha... I suck.

2. Finish Borderland Mujeres project, at least my part of it. 2017 was a great year for collaboration, really. I put some real love and effort into this project, and that heart was multiplied with my partners' collaborations. I want to wrap this project up and keep exploring ways I can collaborate with other artists, writers, and creatives.

I did this and submitted Borderland Mujeres to a few publishers. I've only received rejections, unfortunately, but this reminds me to give this another go on the submission front. I did not explore ways to collaborate with other artists, though I think that's ok.

3. Play and experiment with my own poetry. I want this to be a year of "play" because I don't let myself do that enough. Right now, I really don't have much pressure to create new poetry because I have a lot in the chamber already, which means it's the perfect time to try something new.

I DID "play" with my poetry this year! I actually began writing free verse instead of my usual formal, metrical poetry. I explored new topics, mainly enviornmentalism and ecofeminism, which is interesting and exciting to me.

4. Submit. I'm ready for this step again. It's been awhile since I've done this, but I'm going to go for 100 rejection letters this year! I have only 1 right now. I need to submit twice per week for this to work, at least.

I only got 35 rejection letters this year. I thought I was pretty good at submitting, but I think I was a little inconsistent.

I think I lost sight a little of my routine. It's been difficult because of B's weird work schedule, and I like to try to spend what time I can with him when possible. So I have to be flexible with my writing. I think I need to work on PRIORITIZING what's important. B is most important, but writing comes second, teaching comes third, editing comes fourth.


What else did I accomplish this year?

In January, I published my third poetry collection, The Lost Chronicles of Slue Foot Sue (Angelina River Press). In addition, I survived my terrible ear infection. And good Lord, it was terrible!
In February, I presented at the People's Poetry Festival in Corpus Christi
In March, I presented at AWP in Tampa
In April, I was inducted into the Texas Institute of Letters
In May, I successfully finished my first year at Lamar as an Assistant Professor and survived my ear surgery.
In June, I taught my first graduate course in Women's Literature and did it successfully. I also moved to a new apartment in Baytown.
In July, I presented at Gemini Ink in San Antonio
In August, I began my second year at Lamar
In September, I organized the TACWT conference and presided over the organization
In October, I was a featured poet at the South Central MLA conference
In November, I hosted my first open mic in Beaumont! I'm actually really proud of this and how it went.
And December. This month was the disappointment, so it ends the year on a somber note due to my health issues. It's ok. I know this is temporary and I'll be back to my old self soon.

Putting my year in perspective helps me see that my lull is temporary. I actually had a pretty amazing year. 2018 was good to me. I look forward to 2019.

Here are my goals:

1. For real this time, PUBLISH A SHORT STORY OR ESSAY!
2. Finish my memoir.
3. Submit Iliad and/or revise it. I didn't have much luck with my submissions of the manuscript, though the individual poems have gotten picked up by and large. This tells me I might need to rework the structure of the book and/or add some new poems to replace the weaker poems. So, this year, I'd like to figure that out.
4. Continue submitting and collecting rejection letters. Let's set my goal as getting more than 35, improving on last year.
5. Keep writing poetry, including NAPOWRIMO.


I would also like to run a marathon and/or a half marathon. I'm not going to put that as an official goal because it kind of depends on my health. If the rest of my tests look good, I'll officially set the goal of running a full this year. If not, then I'll adjust and adapt it to something more appropriate.