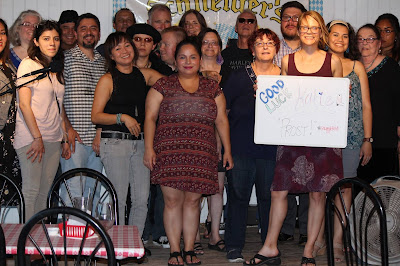 B and I celebrated our New Year at our favorite Indian restaurant and a nice bottle of cabernet. Fireworks, apparently a huge thing in southeast Texas, surrounded us and gave us a lively display from our living room window. We clanked out glasses together, toasting endings and new beginnings.

Before I look ahead and define some writerly goals for 2018, I want to take a quick look back at the monumental year 2017 was for me. It was a year of change and transition, a year of growth, and ultimately, a year of joy. I think the above picture pretty much sums up my year: I was surrounded by, supported by, and loved by some amazing people. 2017 was, in short, an amazing year.

Normally I post my "writerly accomplishments," my books and publications for the year to give myself a visual, but because of transitions, about half of my books are in Beaumont and the other half are in Edinburg, so I'll have to forgo that at least for now. In the meantime, though, I'll give a rundown of this amazing year:

January came with a certain bitterness. Of course, there was Trump's inauguration, but that day was most memorable to me because I was having a biopsy done. I checked into the hospital that cold, January morning, unaware that my personal history was going to coincide with the nation's. My biospy came back clean a few weeks later.

In February, I attended and presented at the People's Poetry Festival in Corpus Christi. I presented on women and writing the body, and talked openly about my health struggles in front of a seriously large audience. It was a curious feeling, being both vulnerable and empowered. It was the perfect antidote to the previous month's experience. 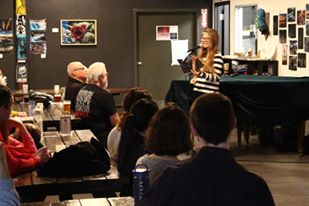 March was a whirlwind month. It kind of is by definition, right? There was FESTIBA, UTRGV'S annual festival of books, and as per always, I was responsible for organizing readings, workshops, and events. I hosted none other than the legendary Jan Seale. Then, the following week, I had my big interview at Lamar in March and visited Beaumont and the campus. I was so nervous! A few days later, I had a reading scheduled in Austin at a local brewery, and my goodness, what an amazing event it was! I thought it was a little strange: reading at a brewery on a Sunday morning. But when I got there, I was immediately assured that this was a perfect venue, time, and space for poetry and art. I read to a room full of non-poets, though they were perhaps the most supportive crowd I've ever had. In addition to me reading, there was also a trio of professional flutists performing. So cool! Though I was exhausted from my interview in Beaumont and seriously sick (thanks, Chipotle, for the salmonella), I had an incredible experience. Then, just a few short days later, I had another reading in Baylor for the House of Poetry. After that, I came home, and probably slept for like a year. 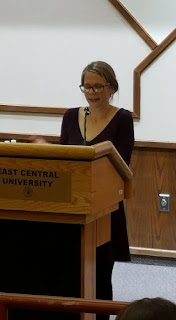 April was another busy month. It was my first year attending and presenting at Scissortail Creative Writing Festival in Ada, Oklahoma. It was so much fun and worth every mile from the Rio Grande Valley. Again, what a supportive audience and atmosphere for the arts. It definitely wasn't what I was expecting in small town Oklahoma. Of course, life has a way of teaching me to not make such assumptions. I didn't take any pictures at the conference, unfortuantely, though I did take one at a delightful sushi restaurant, so I'll share that instead :)  After Scissortail, life calmed down a little bit. I needed it--the rest and respite. In May, I wrapped up another semester at UTRGV, which was bittersweet. I didn't have the "official" word about the Lamar job yet, but I was pretty certain about it at least. I also had the pleasure of reading at Barnes and Noble in Mcallen as part of the valley book release for Texas Weather with Jan Seale, David Bowles, Chip Dameron, and Cesar De Leon. All in all, it was a good (and finally travel free) month. In June, I finally got my official contract with Lamar University and resigned from my position at UTRGV. I could finally tell all my friends the big, scary and wonderful news I'd been sitting on for awhile: I was moving to Beaumont to become an Assistant Professor (tenure-track! OMG!), and, to add a little icing on an already perfect cake, I was going to be editor-in-chief of the university's press, working with none other than my hero Jerry Craven. I still can't believe that happened. Did it really happen???

June felt like a calm before the storm. I lollygagged about the house, not really sure how to go about preparing for this enormous life change. I also did participate in one poetry reading in Harlingen at Rio Grande Grille, as pictured here, with, from left, Anthony Ripp, Brenda Riojas, Odilia Rodriguez, Edward Vidaurre, little old me, Celina Gomez, and my former professor, Emmy Perez. 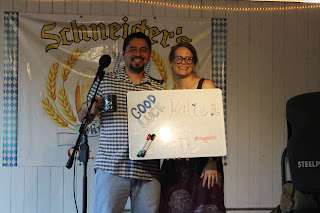 During July, I made a few little "jogs" up to Beaumont in an attempt to find a place to live. It was a little tough finding a place that was in our budget, in a good area, and near my work. We settled on a little two-story apartment in nearby Nederland. I live about ten minutes from campus in a very quiet neighborhood, and it's starting to feel like home. Come August, life was really starting to get going. We did our physical move, cats, UHAUL, and all, but not before an epic send off from my poetry family in the Rio Grande Valley. They threw me a joyous celebration and reading at my very favorite place: Schneider's Beer Garden. It was, indeed, a memorable night! It was put together by one of my very favorite people, too: Daniel Garcia Ordaz, the Poet Mariachi and one of my dearest friends.

Of course, school also started in August, so there was that. Lamar basically welcomed me with open arms. I was on cloud nine. Well, until Harvey hit, of course, which put a serious halt to the best laid plans of, well, everyone. Yikes. And then, in September, I had another round of craziness with the Langdon Review weekend, a heavenly residency, and the Texas Association of Creative Writing Teachers. When am I going to learn to say no? Um, not any time soon.

In October, I met a lot of great HOUSTON poets in attending the Houston Poetry Festival. What a fantastic city and literary scene! I'm looking forward to next year, where I'll be reading as an official Houston Public Library poet for both spring and fall. This city, too, seems to be welcoming me with open arms.

Come November, I turned 31! Yay! And Dad and I ran a half marathon at South Padre Island together. I also became a columnist for the the Beaumont Enquirer. 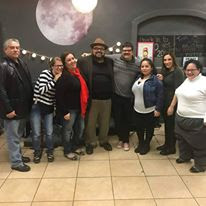 Then, of course, I had to wrap up my first semester at Lamar. After my last class, I was left heaving a big sigh of relief. I did it! And I survived! B and I then headed to the valley to spend Christmas with our folks, and that's where we are now. I was fortunate, too, to get to reconnect with my Valley poetry family at Luna Coffee House for a reading celebrating McAllen's own poet Laureates, 2017 Priscilla Suarez and 2018 Edward Vidaurre.

2017, you were off to a rocky start, but you ended up being a memorable, monumental year. I was incredibly blessed with kindness, love, opportunities, and friendship. I learned that I can survive transitions and thrive in them, too, and that with the support of my friends, family, and community, I can do pretty much anything I set my mind to. 2018, look out, here I come!