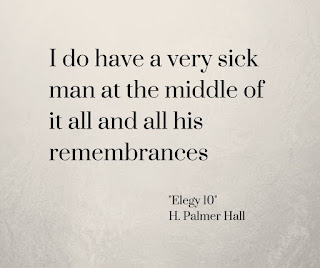 Today's prompt was to write an elegy. I decided to write one for Proctor Street, the main drag in Port Arthur. It's a really surreal sort of place. It's essentially abandoned, though it clearly was once a very prosperous place. In doing a bit of historical digging, it looks like it became abandoned due to a multitude of reasons--hurricanes (it's literally on the coast), white flight after segregation ended, and its neighbor, the nation's largest oil refinery. I want to write more about this place. I need to return and take some notes/pictures and such. I also want to incorporate Palmer's quote somehow. We remember and relish and wax nostalgic, but in the middle of it all, we're sick. Sick. Physically because of the pollution. As a nation because of our racial divisions and economic disparity. Spiritually because we've come to see a miracle as commonplace, expected. Anyway, this needs work, but I at least got a start this morning.

Every Fat Tuesday, a miracle—
The dead street comes alive again
In hues of violet, gold and green
As revelers fill this broken street
With laughter, beads, and flashed teeth
Of joy. The sidewalks accept the boots.
The crumbling walls of buildings
Resound let the echoes bounce
From their concrete. Miracles
Happen, of course. The miracle
We expect each year as spring
Explodes across the littered prairies
Of Texas. A cypress cleans the smog.
A bluejay finds a way to build its nest
Despite the urban sprawl. Wildflowers burst
To life in the swathe of empty grass
Between the east and west bound lanes
On the interstate. So here, in Port Arthur,
The dead rises. The streets fill with people,
And a parade, like a heartbeat, thumps
Up and down Proctor Street, and people love again
These crumbling buildings, these pot-holed streets,
These broken streetlights. The city becomes a city,
The city it was always meant to be,
Of love and prosperity, of promise.

You can almost remember,
How, years ago, this city prospered
With a promise of tomorrow—
How these streets resounded with jazz,
How the scent of life wafted from these buildings,
How the stars looked down on Port Arthur
And grinned. Hotel Sabine sits along the ocean,
Rises up like a proud skyscraper.

But on Ash Wednesday morning,
The stark reality returns:
Proctor Street is dead.

This is not a place for miracles.