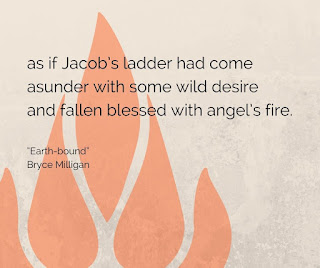 Today's prompt was to write about an object from a well-known story and personify it. I, of course, chose Adam's apple. He's trying to blame the apple for enticing him, much like rape culture tries to place some blame on women for the actions of men. I'd like to work on this a bit more. I like this idea very much because it gets to the hahaha core of some of our problems.

When you sprouted from the branch,
At first a blossom, did you know
How much chaos your flesh could cause?

Do you feel guilty?
If your skin wasn’t quite so rubescent,
Your curves so lovely,
The scent of your ripening so sweet,
If only you didn’t fit
Snugly in the palm of a hand,
If only you didn’t hang so low,
Enticing more than the bees,
Maybe history would have played
Out a little different.

Were you asking for it—
To be plucked from the vine,
to be held against the nose
pressed against hungry lips,
nibbled by teeth,
penetrated by my hunger?

If only you’d hung on a little longer,
If only your shine
Had been snuffed
By some blemish,
If only you’d worn
Something other than candy-apple,
Or fire engine, or scarlet.
If only you weren’t so damn
Beautiful, then, maybe then,
We wouldn’t be in this mess,
Oh my sweet apple of Eden.