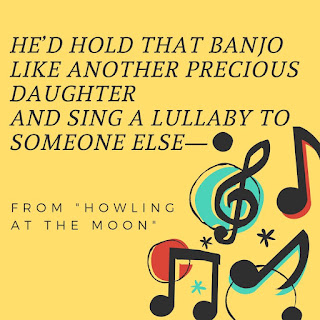 Today's prompt was to write about music in some way. I'm really not a big music person. I listen to instrumentals when I write. I like to run to classic rock. In the car, I listen to NPR, but sometimes the rock station if I'm in a mood. I've never felt like music was necessary for me the way some people do, though. I never was very good at playing an instrument, either.

But my dad? He loves music.

So I thought instead of writing about my relationship to music, I'd write about my dad. He plays multiple instruments, has a regular gig (when the world isn't in a pandemic, of course), and he has a nuanced knowledge of music styles, though mostly he likes classic country, bluegrass, and folk. Also, he played the banjo long before it was cool.

Howling at the Moon

By day, my father was a teacher—
Strait-laced, carrying a briefcase and a smile
Everywhere he’d go. But come night,
After he’d already kissed my forehead,
Brought me cookies and milk, read a story
Or two or three until he’d think he’d see my eyelids droop
He’d go out to the back porch,
And under the moonlight, cradle a banjo in his lap,
And croon.

He’d hold that banjo like another precious daughter
And sing a lullaby to someone else—
A lullaby of longing and of memories
Of bluegrass days, of picking strings
and apples, of whiskey breath
and his own father’s rough hands.

He’d sing of mountain dew,
Of running through a place called Cripple Creek,
Beg the sky to be buried beneath some willow tree,
As the perfectly trimmed cypress trees
That lined our clean neighborhood streets
Swayed in the breeze as tapped his foot.

He'd always finish up the set with "Amazing Grace,"
Singing of God he no longer believed in,
But felt the spirit of at night, here,
In the Eden of suburbia,
A place that, to him, maybe never felt like home.