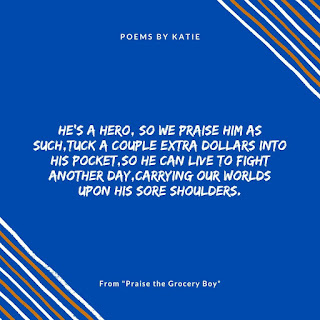 Today's prompt was to write a poem in praise of something else. It suggested that we use hyperbole, but I wanted to I suppose bring this a little bit down to earth, to the reality outside. Yesterday, I went grocery shopping here in McAllen. And goodness, those HEB employees are heroes. Or are they our society's sacrifices? Here, I compare him to David, fighting Goliath. No armor but a dirty bandanna. Not even a stone in hand to throw. And still, he goes out each day to try to save the world for strangers, and for a paycheck that will allow him to live another day.

Praise the Grocery Boy
named David, working on a Sunday afternoon
in spring of 2020, the nimble way he handles
cans of beans and bags of rice for ladies
as his chest heaves, a kind of shield
against the coming darkness. Muscles ache
with toiling, feet sore with fear,  his teeth,
gritted, smile underneath his stained bandana,
a gift of beauty no one gets to see today—
the landscape of his mouth, the labyrinth
of fear and pride that snakes down his throat
and into his heart—so blessed to beat
Like the marching of a naïve soldier.
a surge of pride swells through that chest
as he offers to push the cart for the good lady
to her car, to load it for her, to carry her world
on his broad, sweaty shoulders. His cramped feet
inside his dirty sneakers throb. He’s been on them
for hours and hours and hours without a break,
but this is war. As they walk out into the springtime sun,
he keeps his distance from the woman,
six feet, hoping what heaves from his lungs
won’t heave into hers, that the bandanna
tied around his mouth and nose
is armor enough to keep them safe (it’s not).
He hoists the case of water to his shoulders,
carrying it like Atlas holds the world,
unloads it into the trunk of her BMW.
She thanks him, would slip him a quarter or two
if she didn’t have to touch his dirty hands.

And we delight in this scene, think of this young man,
His brown skin, his beating heart, as a kind of David,
Like the nametag clipped to his chest reveals,
And he’s holding but a stone against a Goliath
So massive it’s invisible to him, to her, to all of us.
He’s a hero, so we praise him as such,
Tuck a couple extra dollars into his pocket,
So he can live to fight another day,
carrying our worlds upon his sore shoulders.