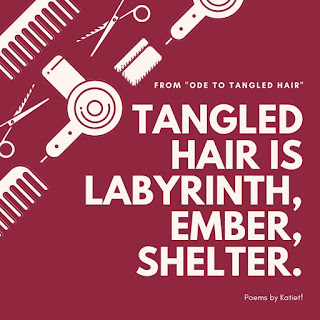 Yesterday's prompt was to write an ode to a simple thing. I looked up odes on the Poets.org to read a few for inspiration. Of course, Neruda has his amazing odes, but I've read those countless times and wanted something maybe a little more contemporary to get my own juices flowing.

As I was reading and browsing, I came across Allison Joseph's "Thirty Lines About the 'Fro" and knew I wanted to write something similar (it's a wonderful poem!). I think most women have a weird relationship with their hair, so I wanted to write about that. We battle it. We know the world measures our value based off of beauty. We try to tame it. But in the end, it's just hair, a part of our bodies, a part of the gloriousness of humanity. I grow my hair really long--I've always liked wearing it long. So I wrote a poem, an ode, to my tangled long hair. This draft is still a little too similar to Joseph's to be anything more than an exercise, but I want to develop this a little bit more so it can be its own stand alone poem.

Tangled hair is labyrinth, ember, shelter.
Tangled hair wants to be free—a rhumba
of rattles in slumber, uncoiled, with open eyes
like a pair of dice. This tangled mess of hair
can’t be conditioned into obedience, respectability,
or the style of the week. It hisses. It knows its worth,
this mop top of wilderness and feral beauty. T
angled hair hangs like a rope for one to climb,
dangles at the invited to come in for a spell.
Tangled hair is like a lion’s mane—
a symbol that a woman’s got better things to do
than tame the beast within herself.
Tangled hair and comb have co-existed,
locked in a kind of battle of split ends, tugs,
and cuss words exchanged between the two,
passed from mother’s spit to daughter’s unruly ponytail
for centuries. Tangled hair, most days, wins.
This kind of hair knows what lies between strands—
what hides beneath the nape. It remembers Delilah,
what a pair of scissors can do with a snip.
It keeps secrets as it wraps around the finger.
Once free from the scalp, it becomes nesting
for mockingbirds, sparrows, falcons.
They say that tangled hair is pure temptation,
is serpent, is sin. Tangled hair is history:
long and winding and complicated, but beautiful.
It holds the scents of lavender shampoo, the sun,
of him in the mornings as she tries to brush him out.
Tangled hair snaps. Tangled hair tugs. Tangled hair resists.
Tangled hair has been pulled on the playground by bullies.
Tangled hair has been cut and chopped and bobbed.
Tangled hair has been pixied. Faded. Dyed and conditioned.
But still, somehow, tangles find their way back:
long and unruly, frizzled, frazzled  and beautiful
like an abandoned meadow, overrun with wildflowers.
Nothings scares this tangled hair.
There’s something deep within these roots, the follicle,
the psyche that keeps her keeping on, a daedal work of wonder,
art, and mystery, a crown a woman wears at the end of a long day
as she unties the bun and it falls, a cascade
of strength, of pleasure, of joy down her spine.