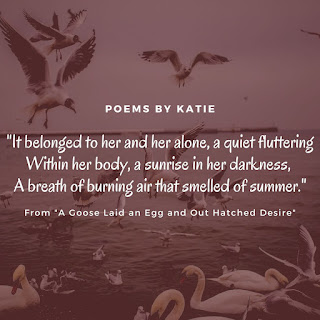 Today's prompt was to write poetry inspired by dreams. My dreams are always kind of disturbing and dark, and I really don't want to go there with my poetry at this moment. So, instead, I decided to use one of NAPO's tools for a little inspiration. They provided a Twitter account, @MagicalRealismBot, that basically tweets a magical realism scenario every few hours. It's really cool. The one I chose to write about was "A goose laid an egg. Out hatches sexual frustration." Geese are one of Juno's symbols, so I thought that was interesting. Juno is, of course, a kind of goddess of marriage. I started thinking about all of the problematic ways our culture views and thinks about women's sexuality, and used that as a jumping off point. Instead of writing just about sexual frustration, though, I thought to write about desire in general.

Anyway, here's my poem draft! It's a little weirder than I usually write, but I think that's a good thing as it's pushing me out of my comfort zone a little.


A Goose Laid an Egg and Out Hatched Desire

It emerged from the golden egg, blood-streaked
And alabaster, its tail feathers slicked with sheen,
Its wings like blooming orchids, its head a perfect curve,
Its beak a golden point of pleasure. And such a gosling

Is a fragile thing. With such a gosling, so much can go wrong.
It belonged to her and her alone, a quiet fluttering
Within her body, a sunrise in her darkness,
A breath of burning air that smelled of summer.

It was real and then it wasn’t. It was hers and then
It belonged to someone else once the fluff
Turned to feathers and the feathers into sky.
It had a name she only whispered to herself—

The downy softness of it but a memory
Of adolescent nights. At night, her hand
Can touch that velvet still, that part of her
That flew away so long ago that once

Made the shadows of her bedroom dance.
She calls it back. Most seasons that goose
Is continents away. But sometimes, it returns


Home to roost within her nest of flesh.